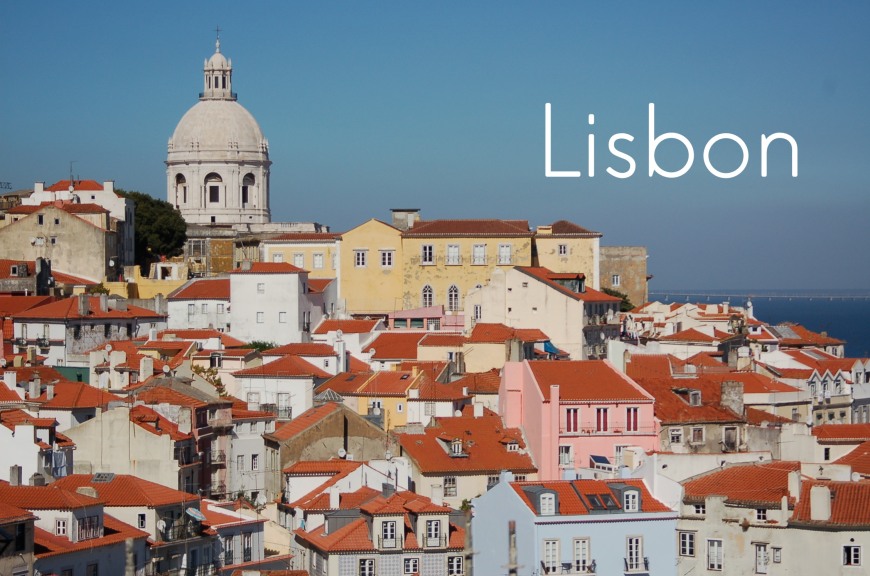 Trepidations linger upon our arrival at the Rossio station metro smack-dab in the middle of Lisbon. Heard the same question half a dozen or so times before we left: ‘Portugal? What’s in Portugal?’

Over an adjoining walkway of worn, black and white patterned mosaics away from the proud pose of King John I’s statue, we gravitate towards the epicenter of Rossio square, a meeting point for Lisbonites since the early 13th century, marked by the tall, phallic statue of King Pedro IV.

Bookended by Manueline fountains, enclaved by stunning neoclassical architecture with splashes of mustard and bumblebee yellow facades above patio-dining and traffic/tram watching tourists and locals, with the burnt red-tiled roofs of jumble-stacked peaks topped by St. George’s Castle on the dramatic ascension of the highest hill in Lisbon, ‘Why Portugal?’ becomes an afterthought.

The Mediterranean way of life starts high above in the soul-warming, cloudless blue skies which meld seamlessly into the sustenance providing sea.  What this temperate climate offers is a healthy diet of vitamin d, grains, olive oil, fish, cheese and the occasional meats and sweets and vinho.

Roam About Mike and Bones steer towards “the occasional”, often, devouring the ever-present pre-dinner/lunch spread of salty meats, olives, sheep’s cheese and bread, guzzling red wine; basically a full meal before the real courses consisting of grilled octopus, sardines, or even MORE meats— capped with a custard tart and Graham’s Tawny Port or moscato for dessert.

Such delicious intake doesn’t burn itself off, luckily, the greatest part of Lisbon is the walkability of the city. There’s really nothing more enjoyable than  wandering through the mazes and steep alley staircases of Alfama, Bairro Alta and Chiado, and Biaxa neighborhoods ending up even further into the maze of residences and store fronts and hills.

In fact, this is exactly how we set out to tour the city; lonely planet/tourist guides left at the guesthouse, map for reference only, bipedal transportation.

Lisbon has some grit to it; there’s graffiti proudly scrawled everywhere, the streets are (sometimes) dirty, and the city has that magnetic ‘My bar/house is in the middle of this alley on a steep hill off another alleyway which has a tram running through it and I deal with it just fine, thanks’ persona. Maybe it’s the lingering moxy from the rebuild of the city after the great earthquake of 1755*, which decimated Lisbon’s then population of 275,000 to the point of a contemplated full-scale immigration to newly colonized Brazil.

Instead, thankfully, the Portuguese people stayed and rebuilt a city replete with Roman, Moorish, Italian, Spanish, and French influences.

Lisbonites are a friendly, chilled out and beautiful people. Their food is stunningly good. The colors, the natural views and cityscapes, inspiringly spectacular. There are pockets within Lisbon where the wind barely stirs moments of quiet, Mediterranean zen…I will stop raving now and just show you Lisbon. 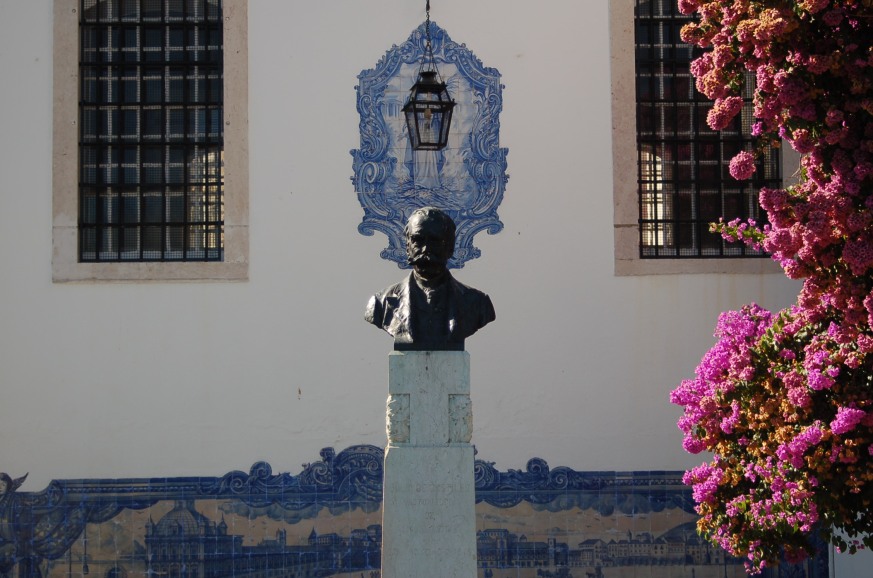 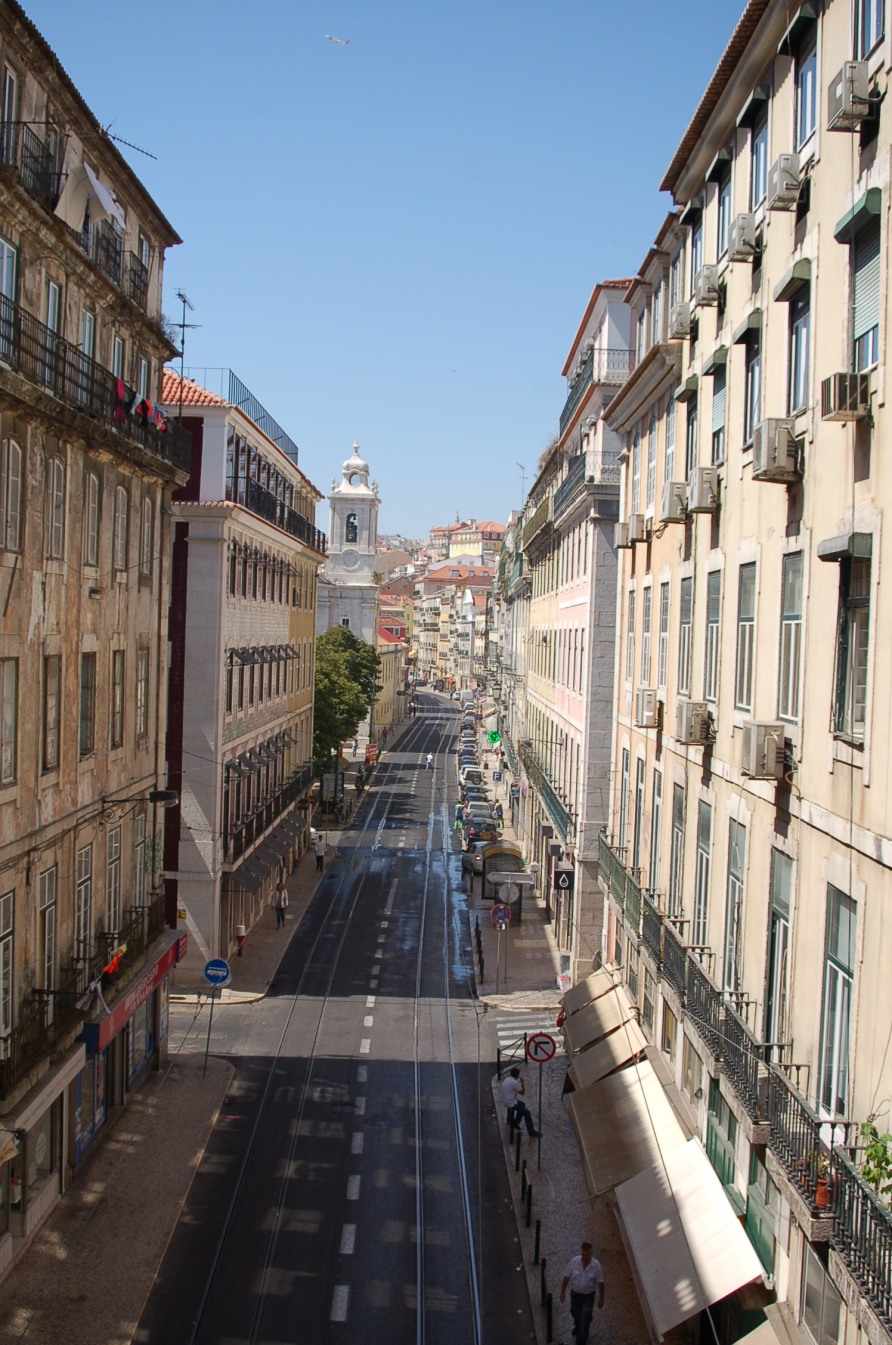 Walkway in Praça do Comércio 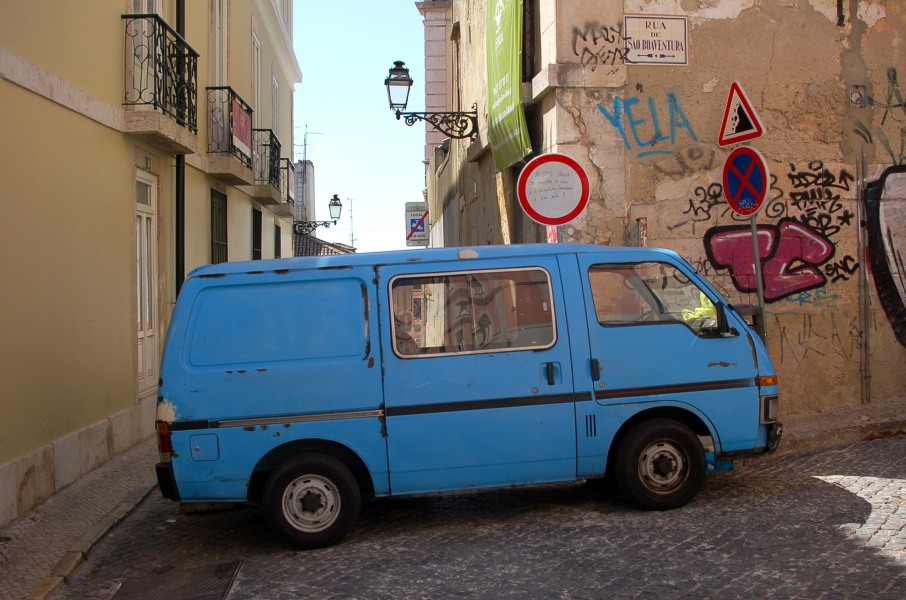 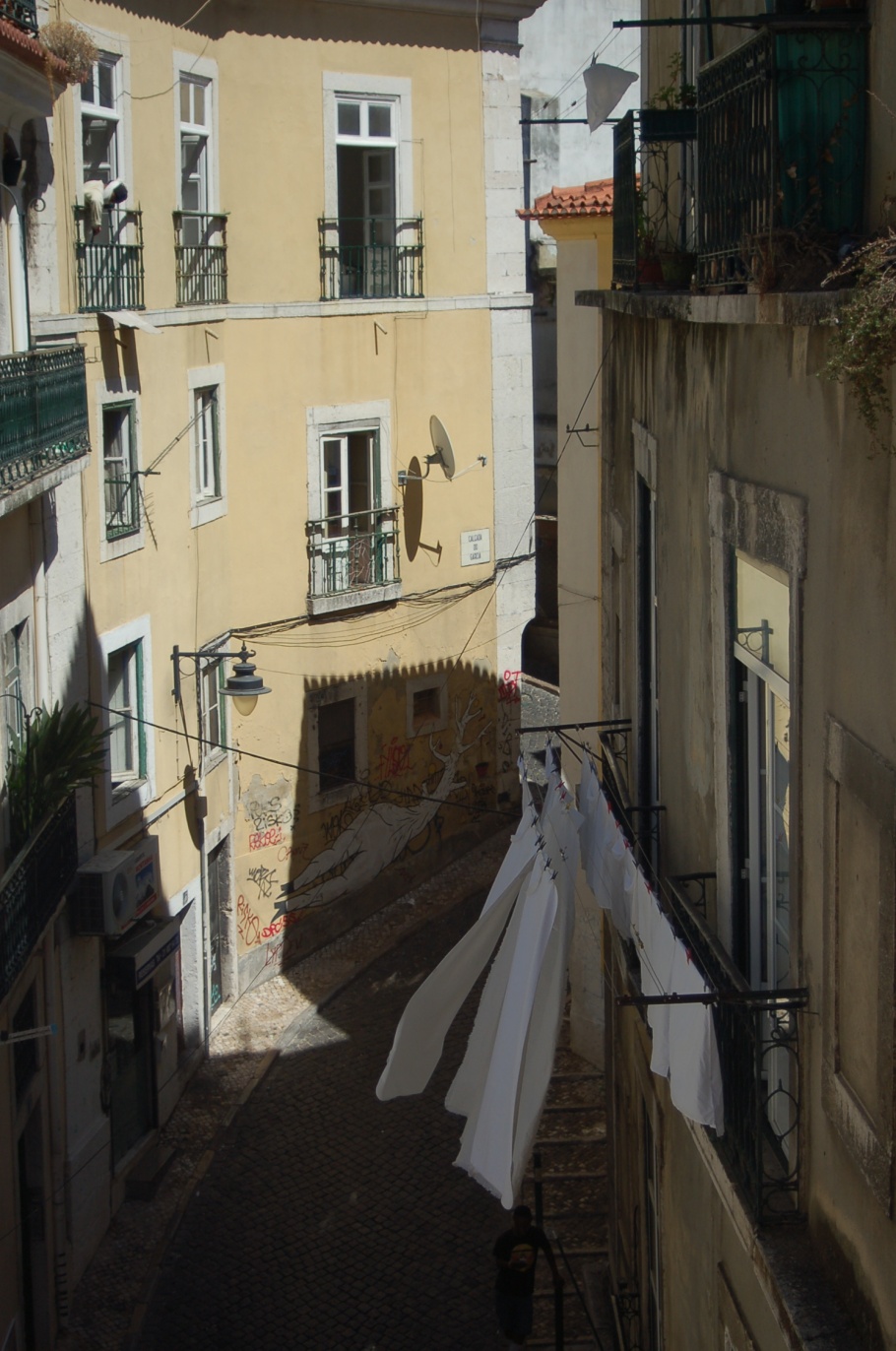 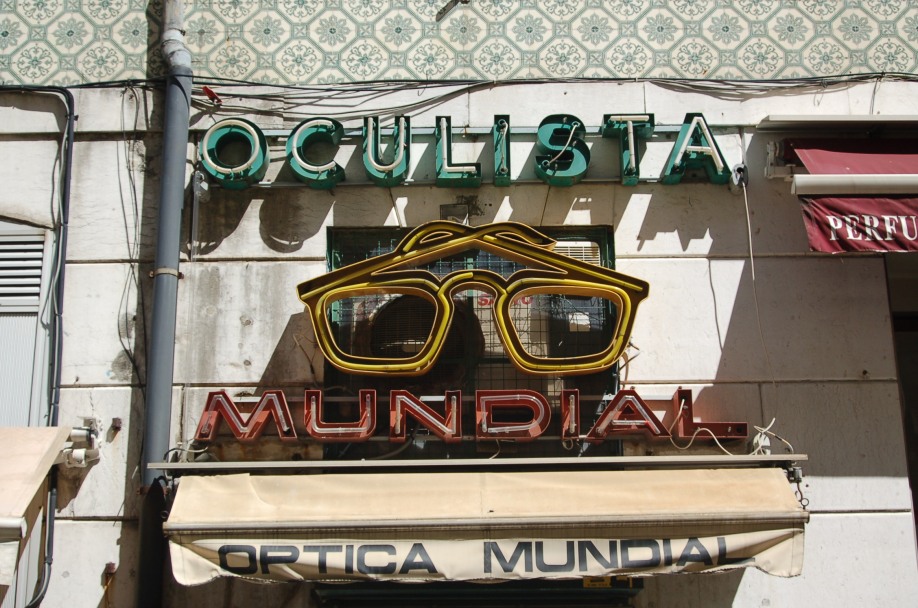 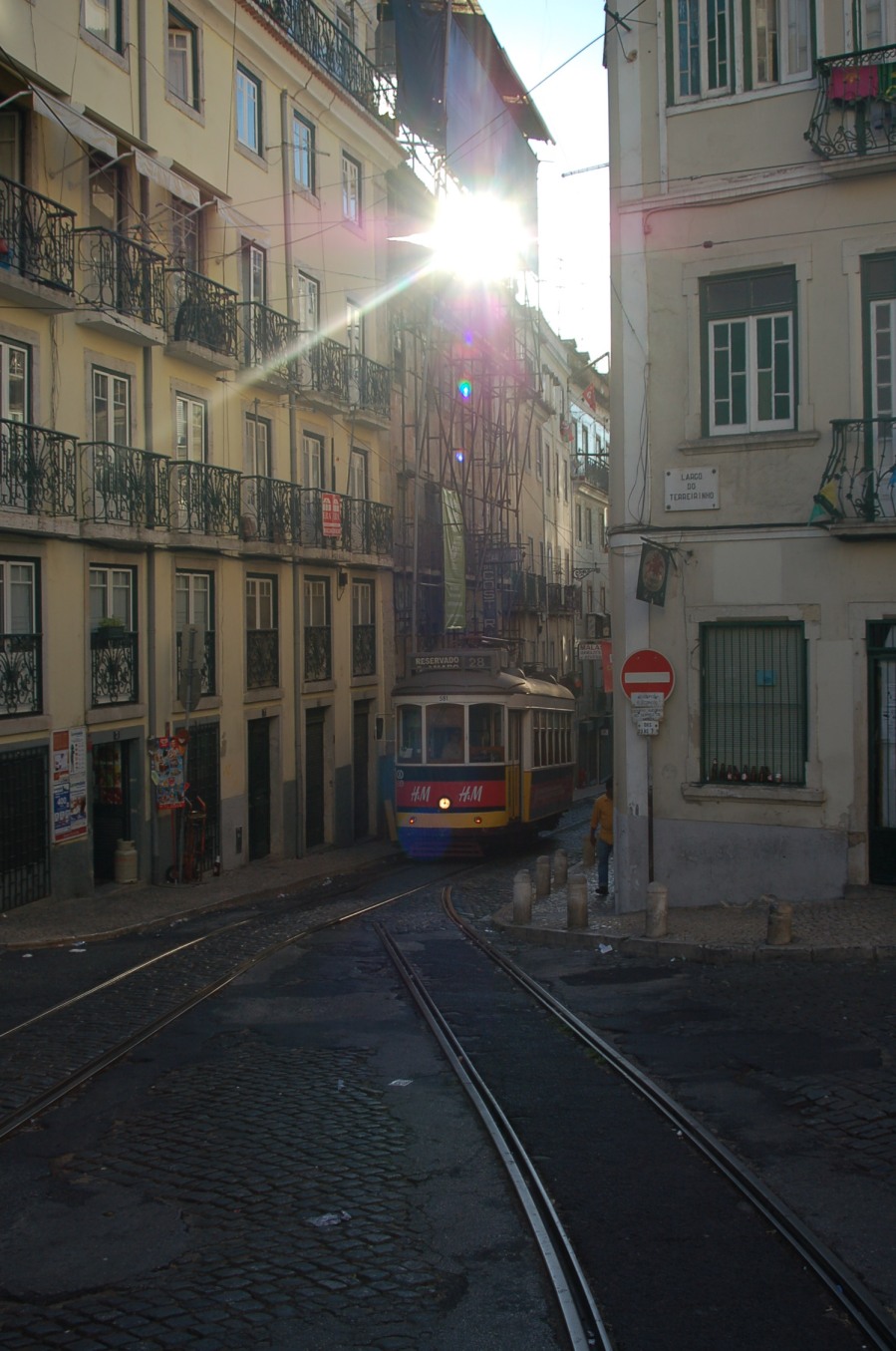 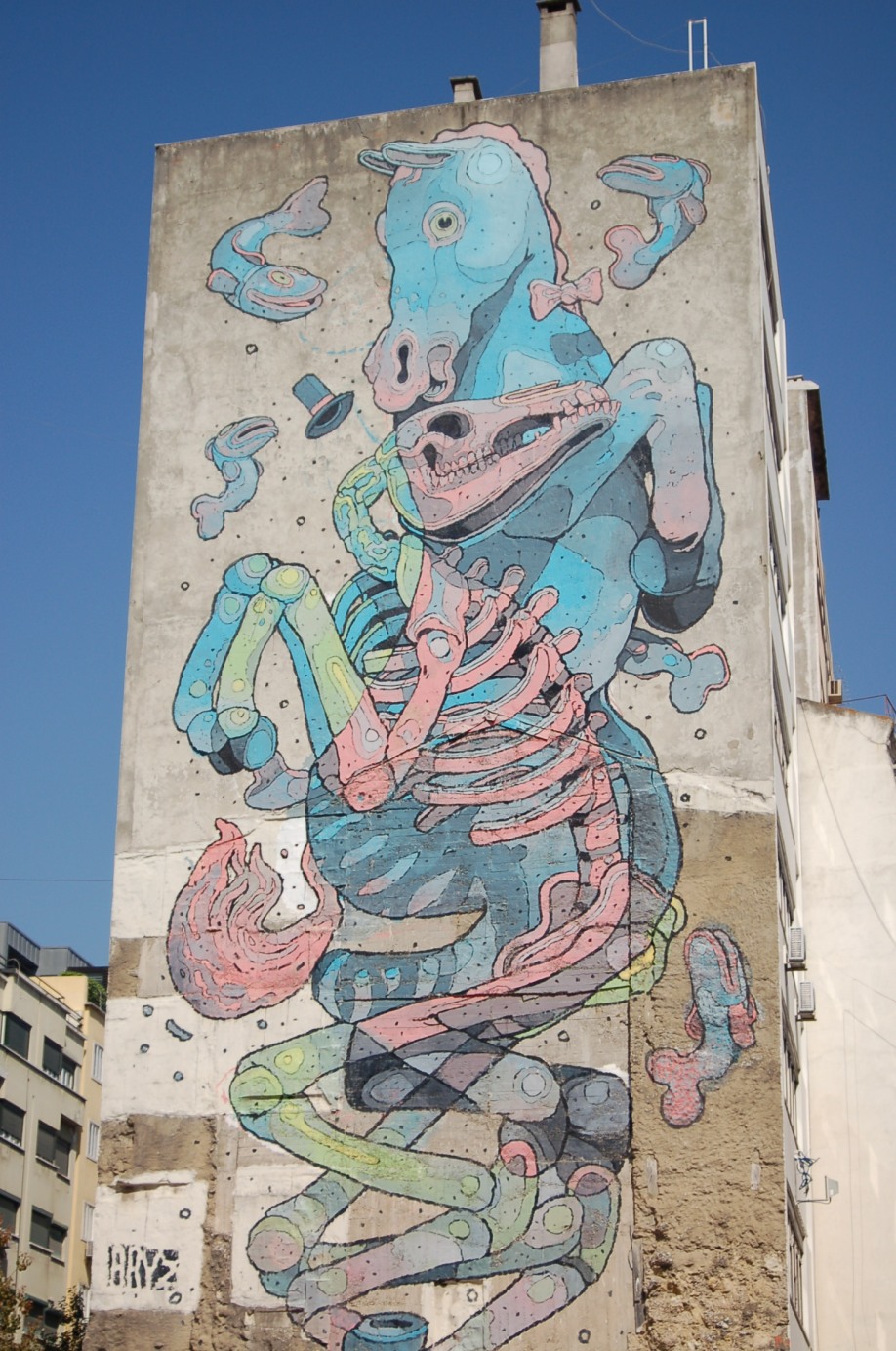 Where to stay: Options are plentiful, but I suggest staying somewhere centrally located, like Rossia Square. Easy access to metro/trams and you can walk anywhere.

Lisbon Story Guest House was a great spot. ~$100/night for a cute Tram #28-themed room with a private bathroom and complimentary breakfast. There’s a tiny terrace on the top floor called…the ‘tiny terrace’; a place to enjoy some private balcony time with a cup of coffee or glass of wine. The en suite bathroom below was built by/for midgets. Sitting down to shower was a new/fun experience.

What to see/do: Walk around, then walk around some more. Here’s the deal: You can look at TripAdvisor’s Top 10 things to do in Lisbon, get set to visit these places, then realize it’s too damn nice out to waste half a day inside. I don’t mean any disrespect, but an Oceanarium is an Oceanarium – you’ve seen one seahorse, you’ve seen them all.

The Museu Calouste Gulbenkian – touted as a must see in Lisbon but honestly, the historical collection is pretty ho-hum. Skip the old stuff and tour the surrounding gardens, visit the modern art museum next door to see some very cool ‘Alice in Wonderland’-esque interactive exhibits, and the works of the very talented multi-media artist, Claudia Larcher:

Vinho Venha – Bones found this wine tasting last second, and I’m so glad she did. Vinho Venha offers wine tours, and wine tastings all over Portugal, but their Lisbon home tucked in a nook off Rua de S. Paulo, just next to Calcada da Bica Grande, is a hidden treat. Francisco wasn’t available for the tasting, but his wife, Janice took us for a delightfully boozy journey through Portugal’s wine regions. Can’t recommend this enough – was a highlight of Lisbon.

After wining up, sweat it off by climbing up a view-point like the Miradouro da Senhora do Monte below. 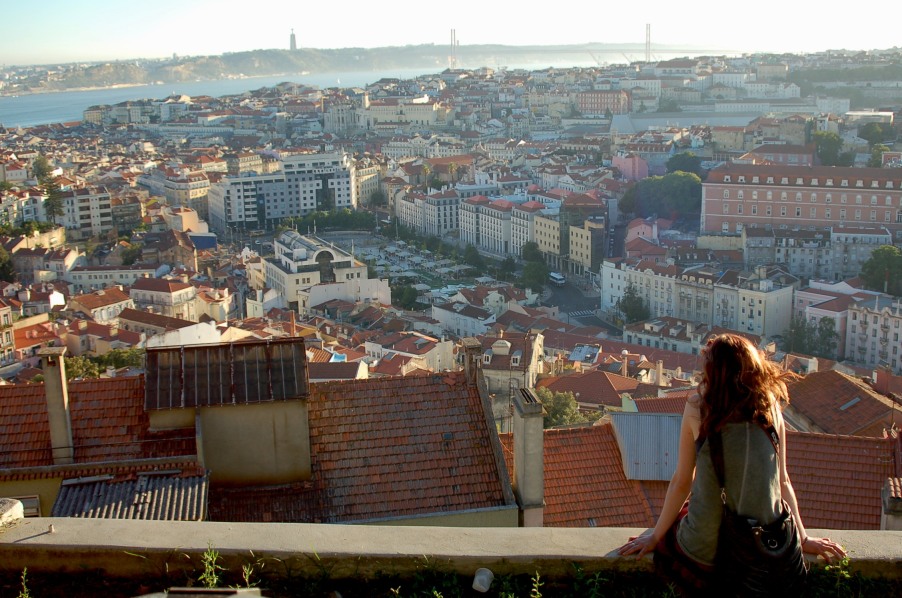 Where to eat: Like majority of the Mediterranean, people eat a late lunch, and a super late dinner. Getting inquisitive smiles for sitting down for a lunch before 3pm isn’t uncommon. Eating dinner before 8pm…please, goofy tourists!

Maria Catita: Close to Praça do Comércio, this unassuming little place literally translates to Quaint Maria. Anything on the menu is solid, but the grilled octopus is a must and meaty enough to compliment the barrage of douro reds offered. The place was so good, we came back the same day for dinner – I had the shrimp stew bowl – ate so much, Bones had to roll me home. Also, they sell these sardines…I mean, c’mon, ‘Psycho’-themed Sardines. Sold.

Largo: This is a cool-kids lounge restaurant. I think I had the sautéed squid (we drank a little too much wine before hand). I remember the decor being awesome, the wine was great, the bread, good, and the chilled melon ceviche shot pre-dinner was nice…anyways, try it out.

Time Out Mercado da Ribeira, Cais do Sodré: The recently (still being) remodeled market has been a Lisboan staple since the 1800’s. Time Out got a hold of the space, gave it a modern overhaul. One of my favorite spots in Lisbon. You want fish? They’ve got fish. Want meats? They’ve got meats. Want cheeses? So many cheeses!

There’s a common bar area set up in the middle (pic below) to wet your proverbial whistle with self pouring beer and wine stations. I believe produce stalls will return soon.

Cafe ‘A Ginjinha’: Conveniently located a few paces from our hotel, Cafe Ginjinha is nothing more than a closet-sized space selling ginjinha. The national drink is around $2 for a shot of it – you can order with or without the infused sour cherries. Bones took a sip and started critiquing in a very throaty, Kermit the frog voice (she didn’t like it). It’s strong fruit brandy front with a very boozy aftertaste, and gets you loose – get some!

Next up: The End of Europe, The Queen of Fado, and Comfy Comporta.