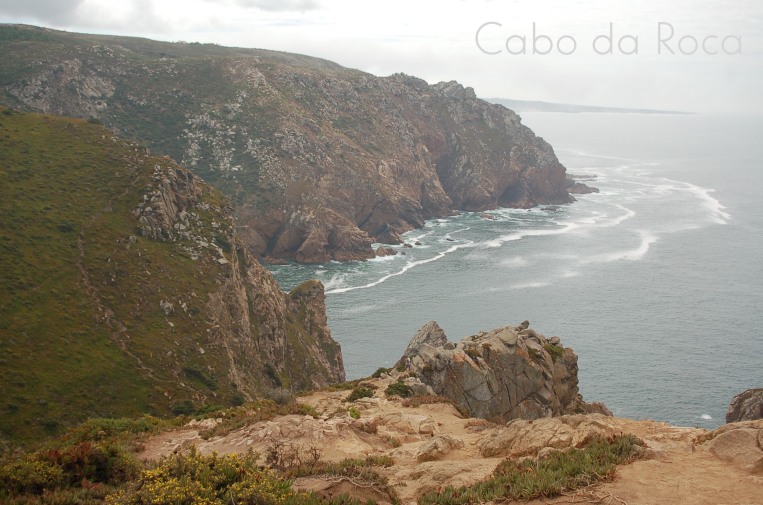 Metro to Lisbon airport to pick up our awaiting chariot in the form of a Fiat Panda that’s about as aerodynamic and agile as a living room with wheels, filled with Oprah clones.

Bones: “When was the last time you drove stick?” 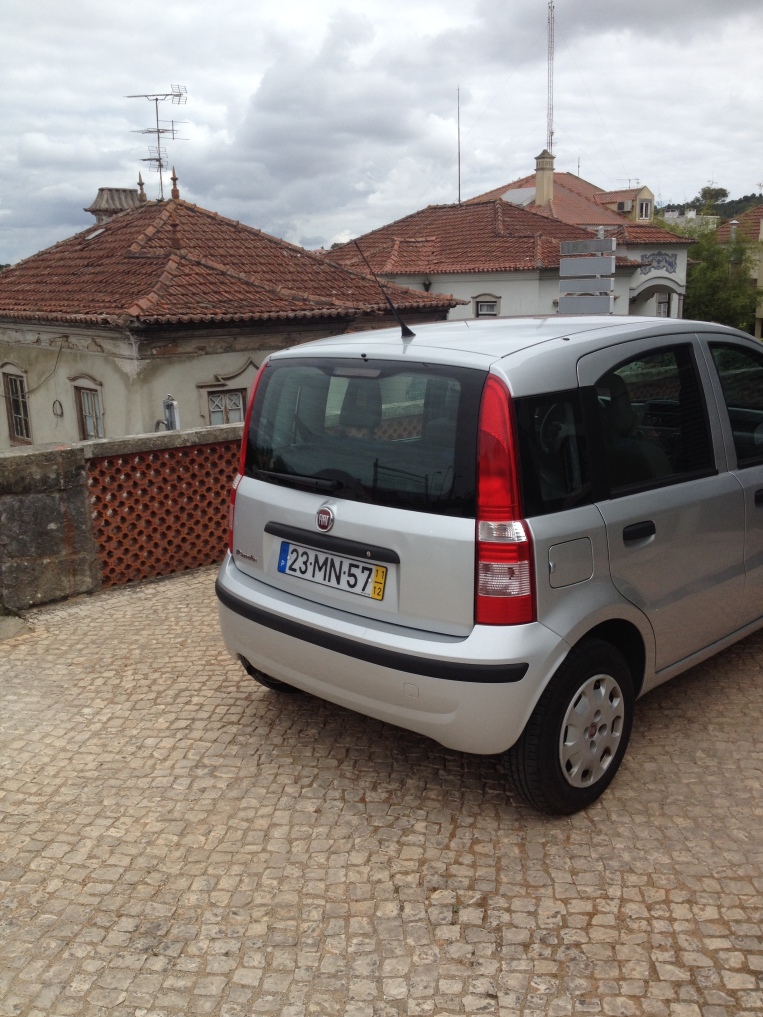 Once the Panda aligns with my pro driving style, I basically get laughed off the freeway by aggressive passer-bys as we leisurely drive towards Cascais for a quick pit stop. This is vacation and I don’t care if the rental car doesn’t have the testicular fortitude to go the actual speed limit, or, if I inadvertently miss the cash side of the toll station and barrel through the easy-pass lane, guaranteeing ticket issuance of a 25 euro fine. Stupid Panda…

After Cascais, we continue north on N247 along the coast through small villages, past stunning beach scenes where monstrous white-capped waves pummel the Iberian shore. We make a left on Estr. do Cabo da Roca and  finally hit an end point, literally, at the street namesake, Cabo da Roca — the most western point of the European continent. 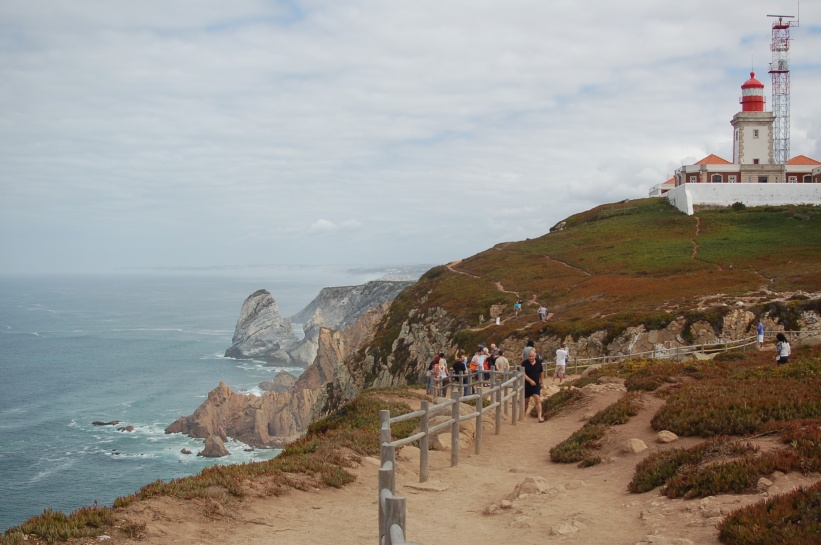 This place may sound/look familiar, as a Polish couple recently attempted to take selfies right by the cliff. Unfortunately, the two stumbled over the edge plunging to their death as their children watched. This terrible circumstance keeps me from poking Darwinistic fun of my Polish heritage. Poor kiddos.

In researching things to do in Lisbon a town called Sintra kept coming up as a ‘Must See’ attraction. Well, Sintra isn’t in Lisbon, but it’s close enough for a 35-minute train or Panda-ride from Lisbon and 30 minutes from Cabo Da Roca in the west, and absolutely worth it.

We grab a room at OH Casa, just down the street from the train station. The old guest house is really cute, the rooms are comfy, the decor unique and fun, and you can pour your own drinks from the bar overlooking a relaxing fenced-in garden.

Every morning, the owners whip up a lovely traditional breakfast including Pasteis de Nata – flaky custard pastries that loosely translate in English to ‘mouthgasm’. Oh, there’s an oil painting of a guy with a Motörhead patch on his sleeve in the common room = home. 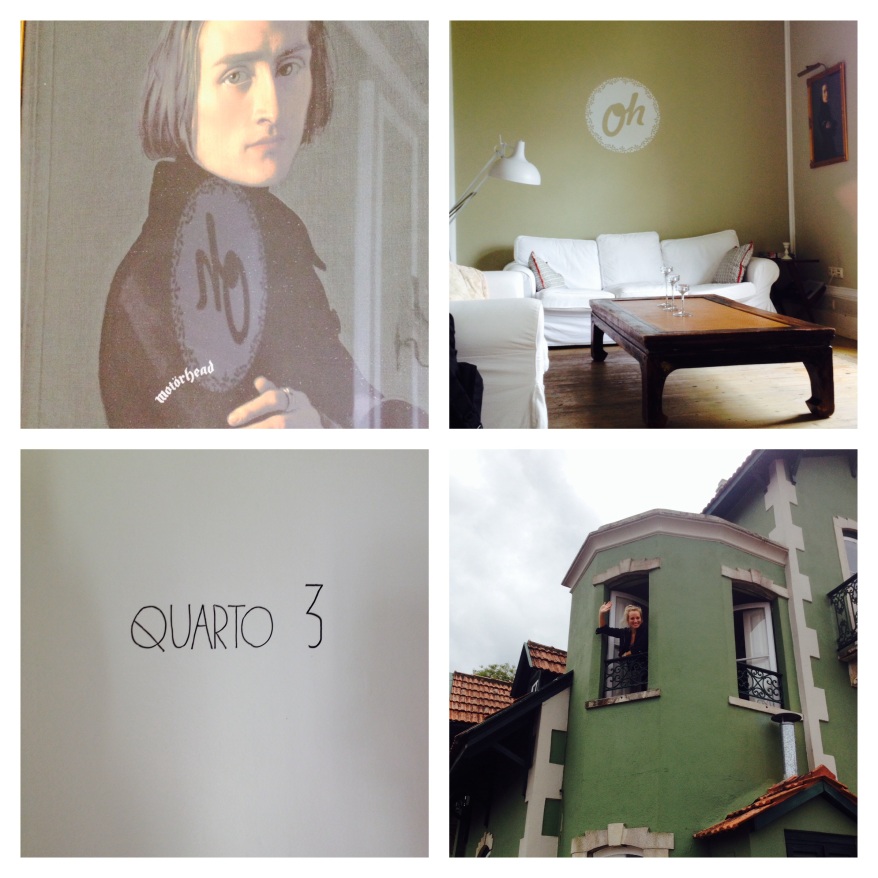 We walk up a steep residential back roads of Sintra to Pena Palace, a revamped 20th century UNESCO World heritage (all of Sintra is pretty much UNESCO) site with history dating back to the middle ages. 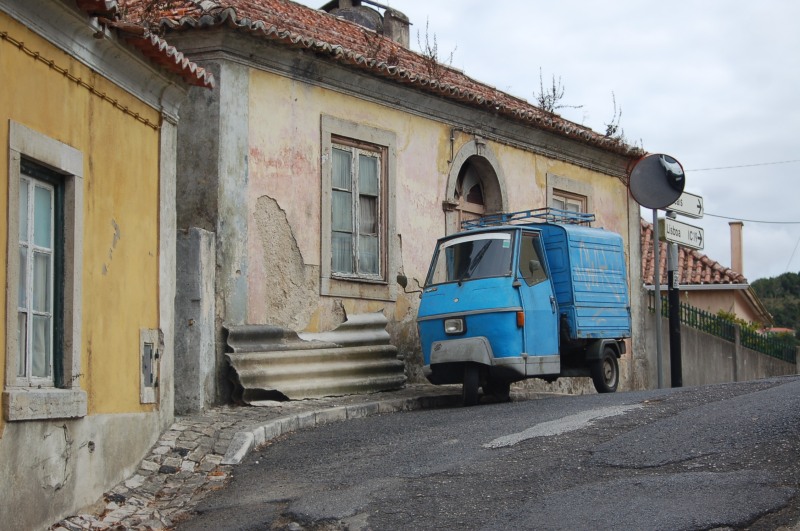 The pictures below don’t do it justice, but Pena Palace is one of the coolest sites I’ve been to. I mean, look at the color(s)! 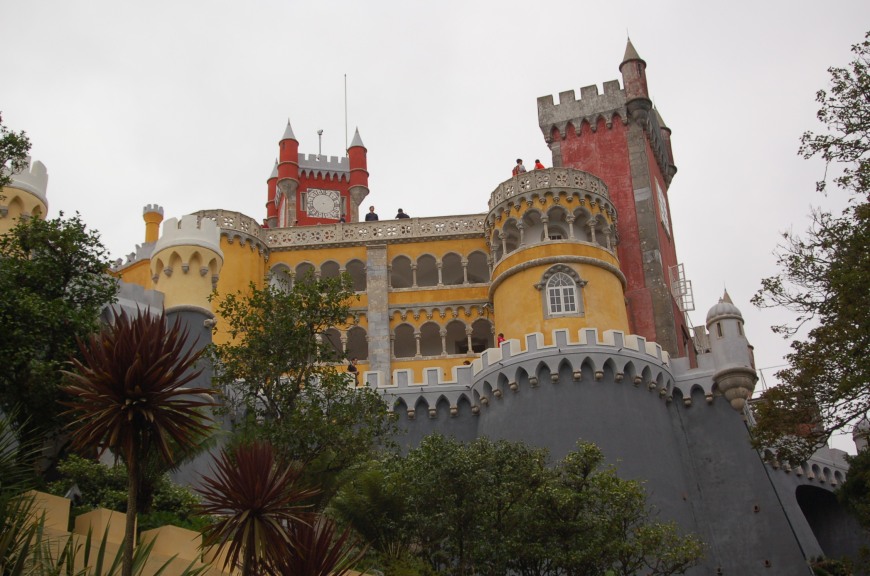 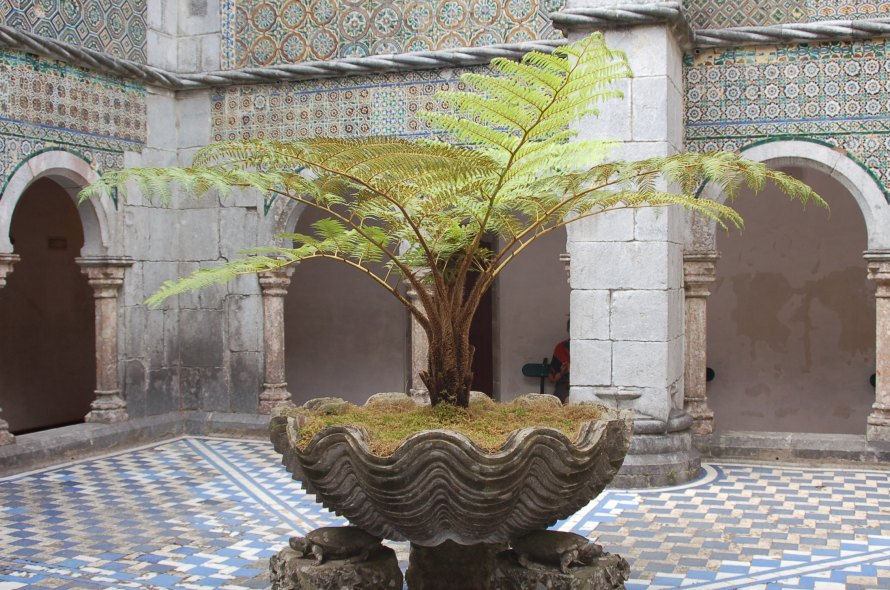 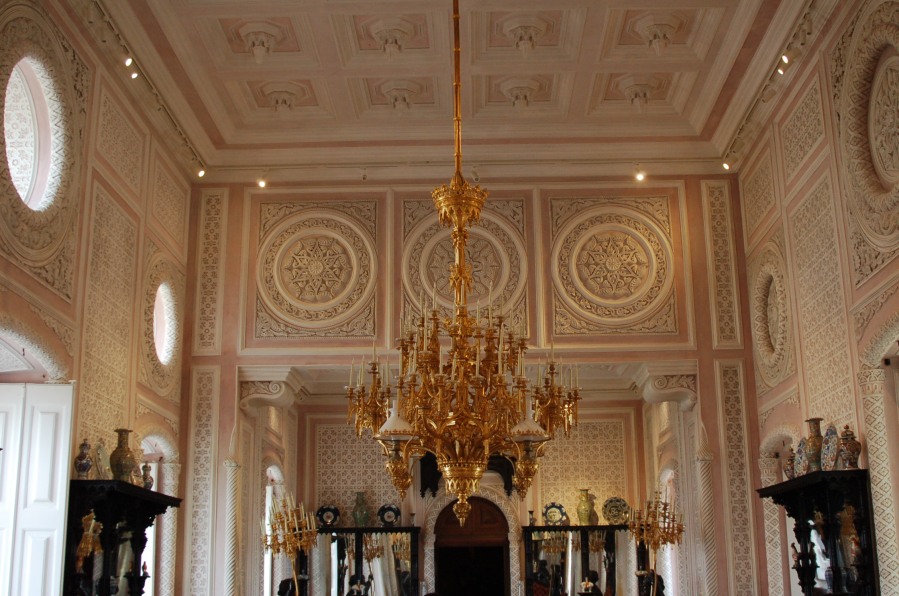 Funny, this is actually how my dining room looks. 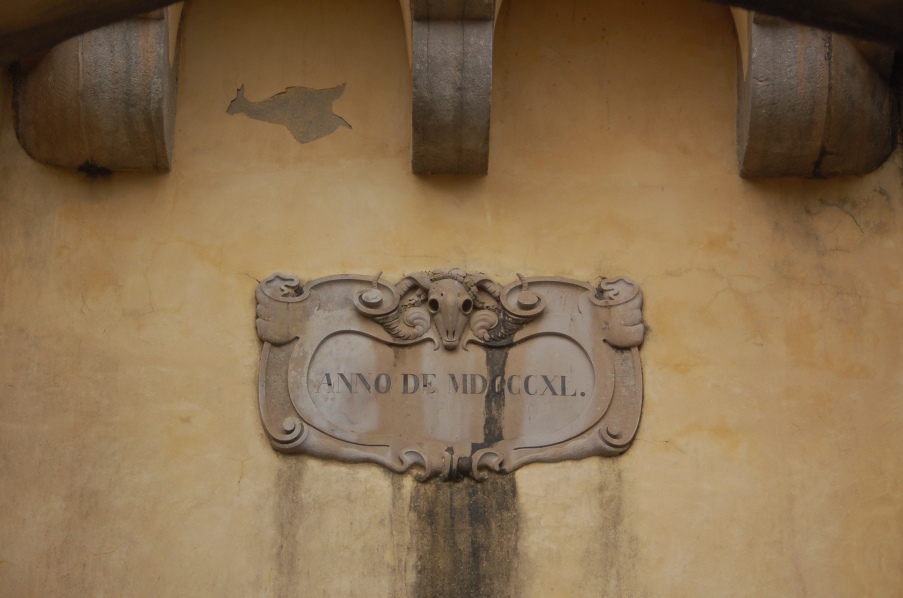 Just down the road, along a winding path through Pena Park —which is filled with some seemingly displaced fauna in Sequoia, ferns, and some Asian varieties—is the Castle of the Moors, or what’s left of it. 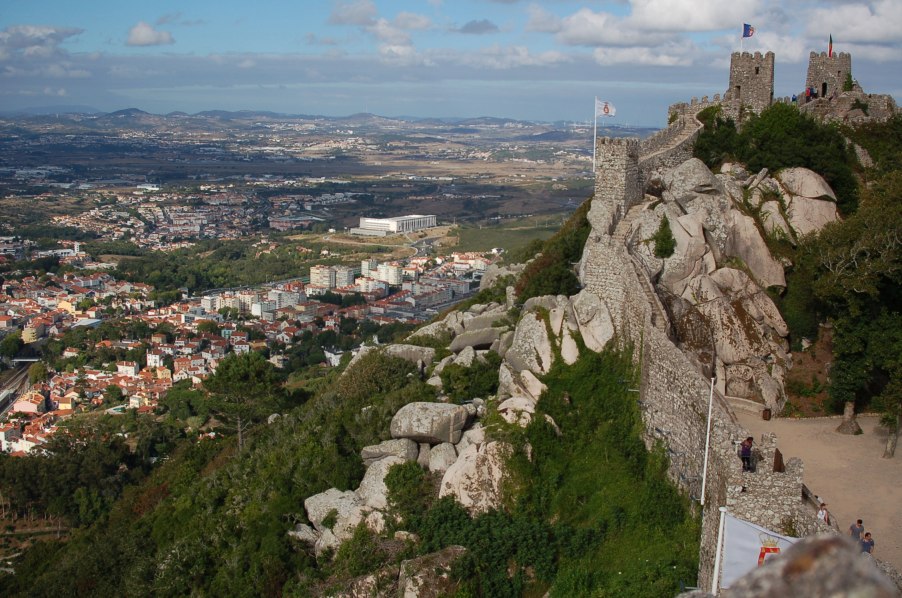 Currently, the Moorish Castle consists of a bricked wall with tremendous views, remnants from the 8th Century during the era of Muslim Iberia. But I can’t help consistently looking off the the south to the flamboyantly stunning Pena Palace. If the Moorish Castle is John Tesh, Pena Palace is Liberace! It’s not that the Moorish Castle isn’t incredibly beautiful in its own way, it’s just that everyone knows the real party is at the top of the hill. 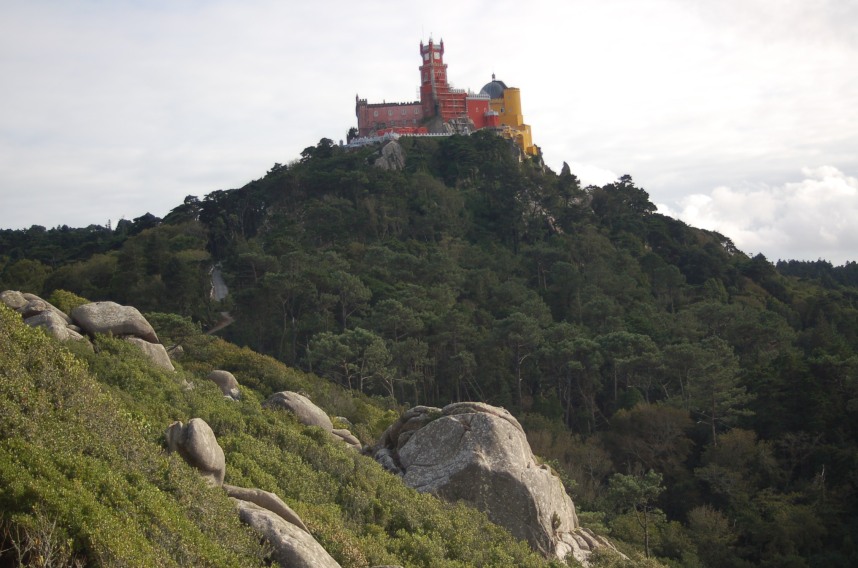 Can you turn it down up there?

Do the Moorish castle first when in Sintra.

Walking back down the mountain, the lady and I happen upon a small tapas restaurant called Nau Palatina. This cute unassuming restaurant serves up the best grilled octopus in Portugal (possibly the world?) and an amazing shrimp dish, but the real winner here was a savory lamb dish swimming in spicy chili pumpkin sauce. Getting hungry just typing about it and it’s only 7am. 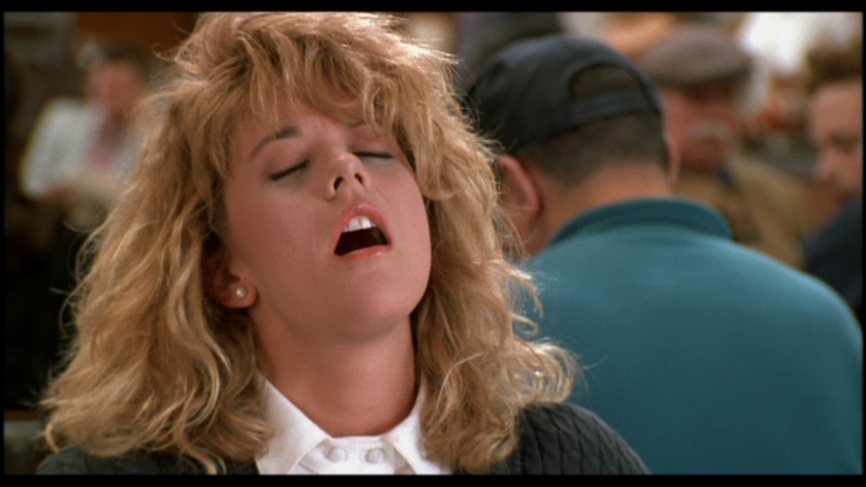 Sintra truly is a fairy tale-esque land inundated in palaces and castles and monasteries, but as lovely as offerings are, my castle and palace attention span (CPAS) is limited to about three sites, so we chose the last destination wisely heading to the gem of the crop, Quinta da Regaleira. 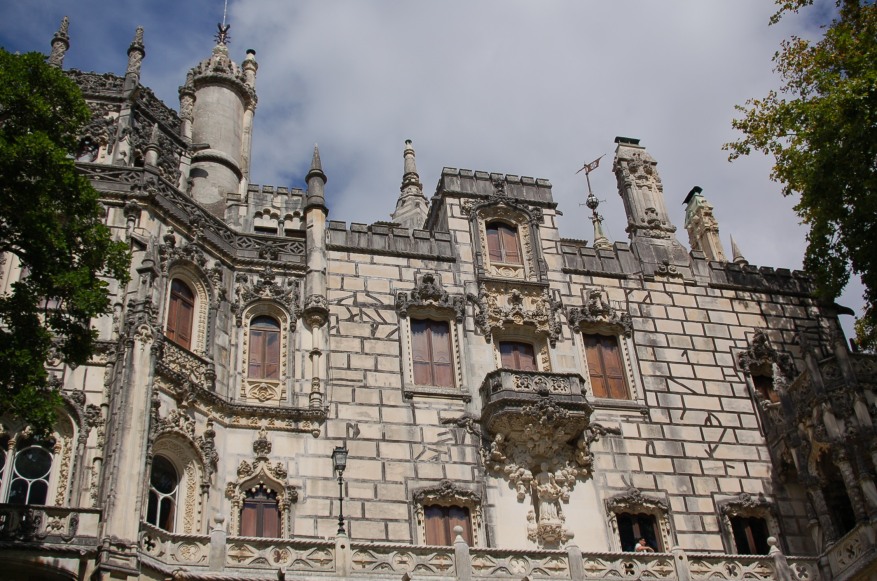 According to Wikipedia, António Augusto Carvalho Monteiro had this marvel built with the help of architect Luigi Manini, back in 1904. The castle and grounds are replete with symbolism of the Knights of the Templar, and the Rosicrucians. Secret societies aside, this place has the coolest things ever: an underground grotto. 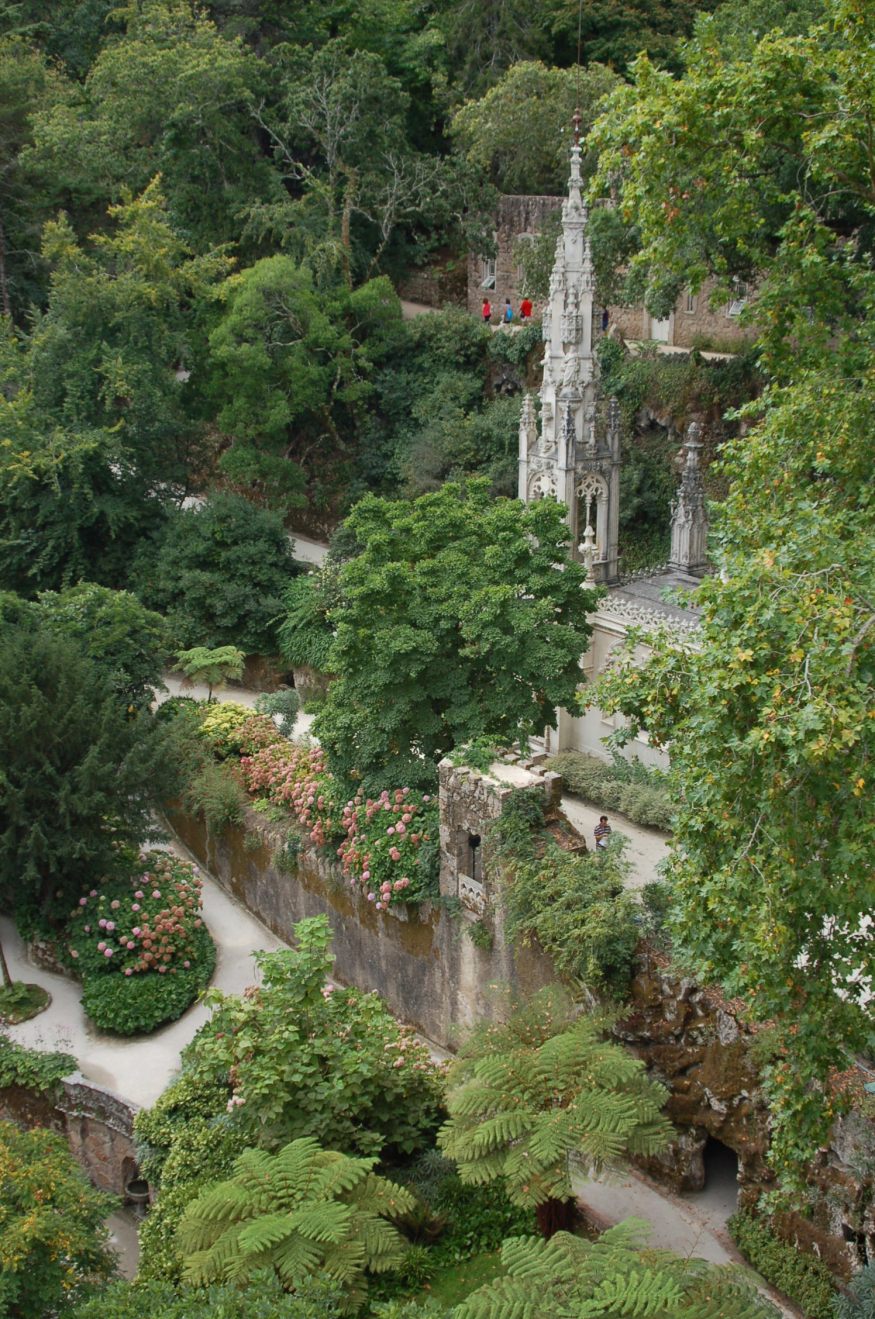 Hidden among the crisscrossed trails above is the entrance to the greatest hide-and-go seek spot on Earth. Oh, you don’t have a grotto at your house with waterfalls and a subterranean turret leading you back outside to your massive yard? Peasant! Get off my blog! 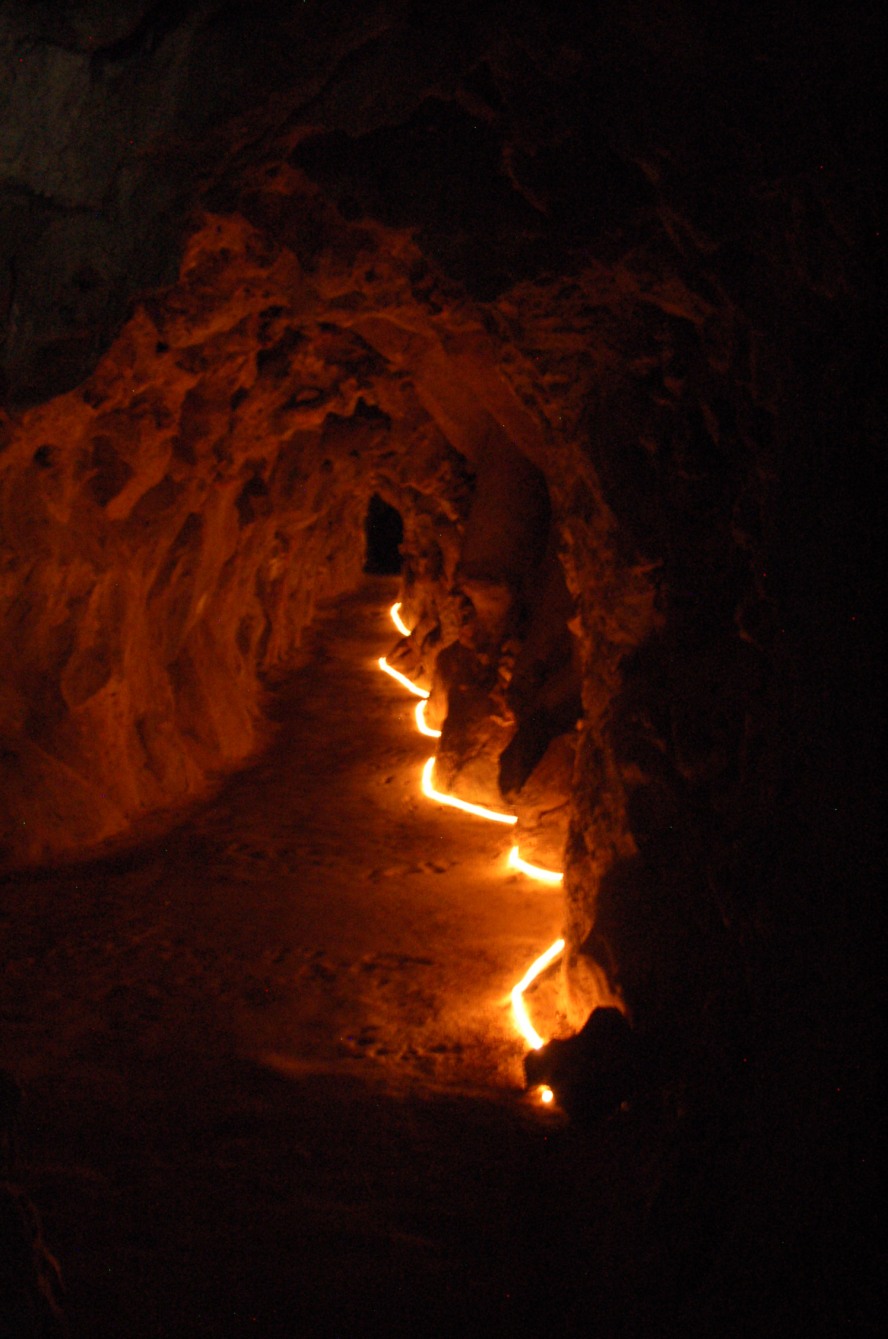 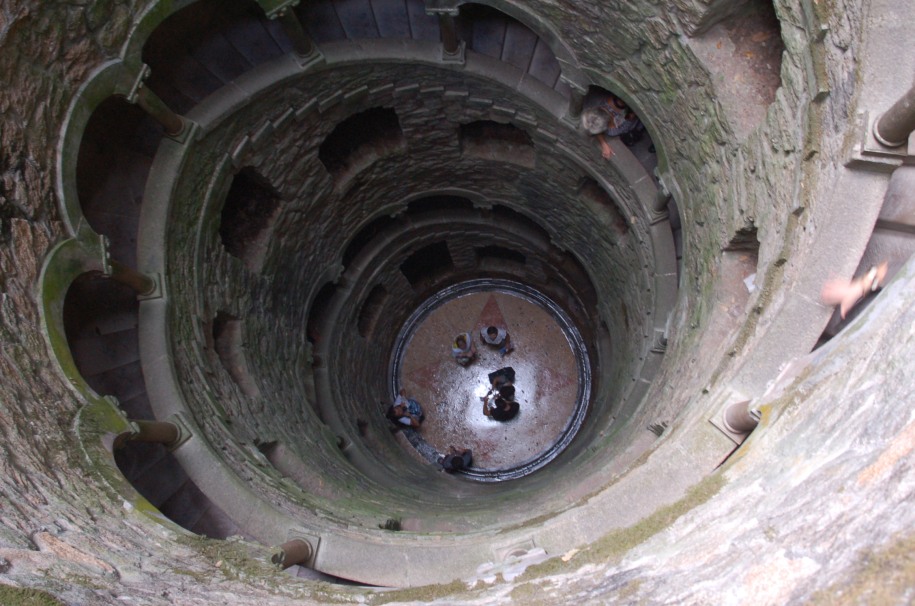 I wish upon the wishing well for a water balloon to fill and fell.

Such wonder brings tourists by the masses —the one downfall of Sintra as droves of fanny-packed day-trippers shuffle about the center of the city. But, the scuffling sky-gazers all magically disappear in the evening when the real Sintra is revealed by the blissful orange sun setting over palace-topped hills.

I know, I sound so pathetically romantic and mushy.

But here’s why: I’d never had Portuguese cuisine before this trip. Port wine, yes, but not the cuisine specifically. Not a bad meal was had in Lisbon, nor Sintra, with those crazy pastries, and tapas from Nau Palatina, I didn’t think it could get any better. But it did. At this place: 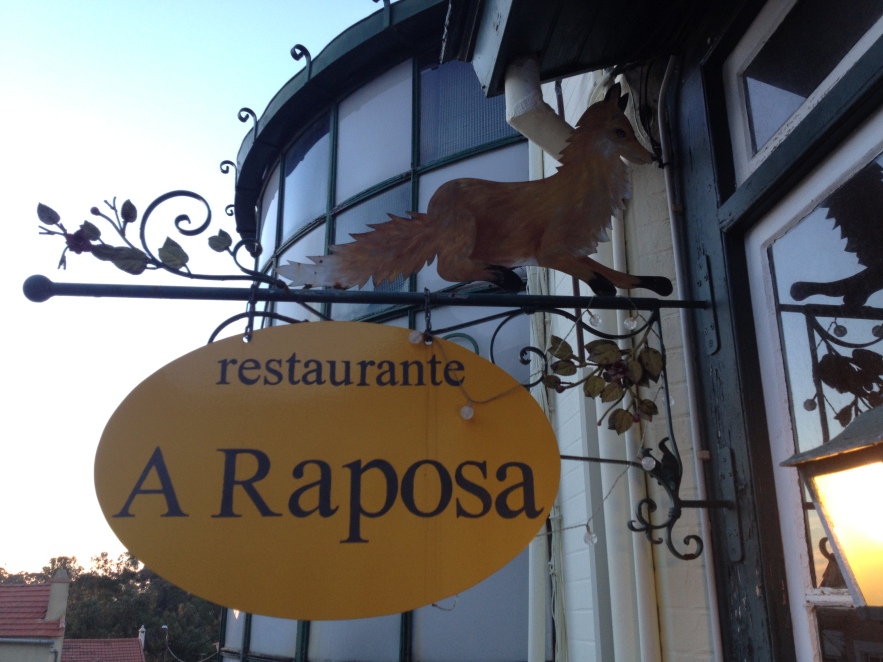 If you want to take a culinary trip to the very core of Portugal, a visit to A Raposa will do the trick. Bones and I are the first diners to arrive, greeted by a (seemingly) curmudgeonly matron, who grumpily points at the menu stand outside and mumbles something in Portuguese. I tell her we have reservations in that awkward ‘I don’t speak Portuguese so if I speak English louder than normal maybe you’ll understand’ voice, and she begrudgingly leads us into a massive dining room.

We’re the only guests (for now) and our hostess lights the table’s candles and brings us her pick of wine after shaking off my hesitant selection. Not sure how my choice compared but her pick is an incredible Douro red (Northern Portugal – seriously, next time you’re in the wine store, grab any Portuguese Reds. They’re amazing.)

I order a sausage appetizer and out comes one of the greatest things I’ve ever tasted: black (blood) sausage with a dab of pesto, sesame, topped with a tomato marmalade on a toasted bread square. 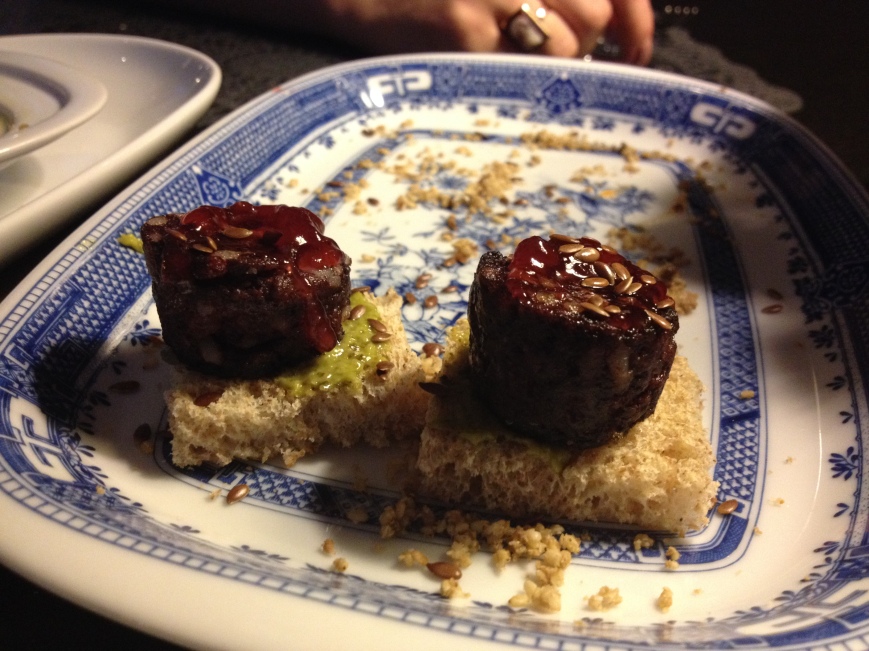 We’re still talking about the appetizer when our main meals arrive (which were absolutely phenomenal). The room, with all 8 tables now occupied with patrons, alit by candles, is suddenly filled by the surprisingly strong voice of our grumpy hostess.

She surprises everyone (literally, some people jumped) by serenading us with a goose bump inducing Fado song. I had never heard Fado before as we skipped all the ‘Fado themed’ bars in Lisbon, but here, in this big room echoing with our hostess’ songs, with flickering candles, exceptional food and wine – this is how I imagined it would look and sound.

Our hostess ends her song, beaming from ear-to-ear as the room erupts in applause. She thanks everyone, bows repeatedly, and humbly accepts our requests for an encore.

Portugal; what’s not to love?

40 comments on “A Portuguese Panda and the Queen of Sintra”