Our four days in Havana still remain flashes of recollective unsettledness. The city—Cuba in general—seems so familiar yet, around every corner there’s inversions of the expected. An intoxicating, warping mirage; but after a couple of days, it starts to test one’s travel mettle.

Havana, originally founded in the 16th century by our friends of España as a connect to the New World, looks as though an omniscient being paused the country in 1959 (with the ousting of US-backed President Batista), un-paused for a few years in the 70s to an exclusively Russian audience, then hit the power button just as the proverbial remote was smashed to bits in the collapse of the Soviet regime in the 90s. 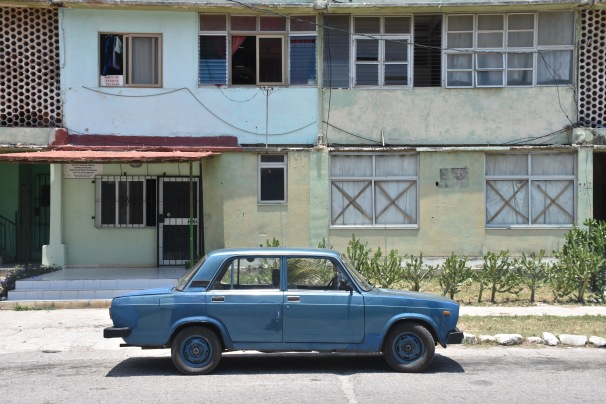 What’s left, infrastructurally, is ‘Battlefield Chic’ — the endearing term we used to describe how Habaneros and Travel Channelers are marketing the city: 50s cars, cigars, and ruin photography. 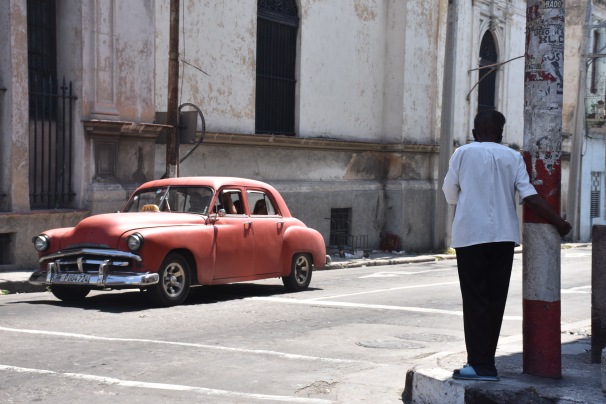 A handful of Cuban Americans we talked to before the trip all gave essentially the same grave response: “Why would you go there? I, we all, left for a reason.” 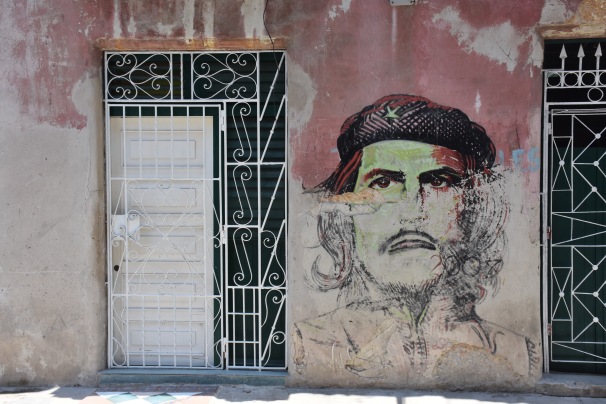 Our trip starts with an evening lap around Havana in our host—Rafa’s—battered ’56 Dodge Kingsway, hitting up the main sights: Plaza Viejo, El Capitolio, Revolution Square, and the main strip (malecón) along the sea.

It’s a surreal moment, seeing the city for the first time—the bad blood with the US, the politics, the pre-trip visualizations, all unveiled amidst the burst of sputtering car fumes and bending sounds of dance clubs and street bands as we whip on by. 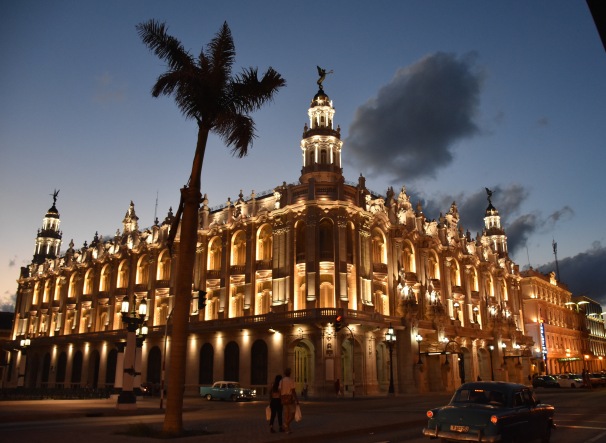 We stop to eat at Gringo Viejo, a country-style, ‘Old Gringo’ movie-themed paladar run by future Roam About Mike; if my future were the Cuban James Brolin (one can only hope).

The giant meal of ropa viejo washed down with local brew is amazing.  The travel day catches up with us, bellies full, we leave, but not before snapping a pic with future Mike. 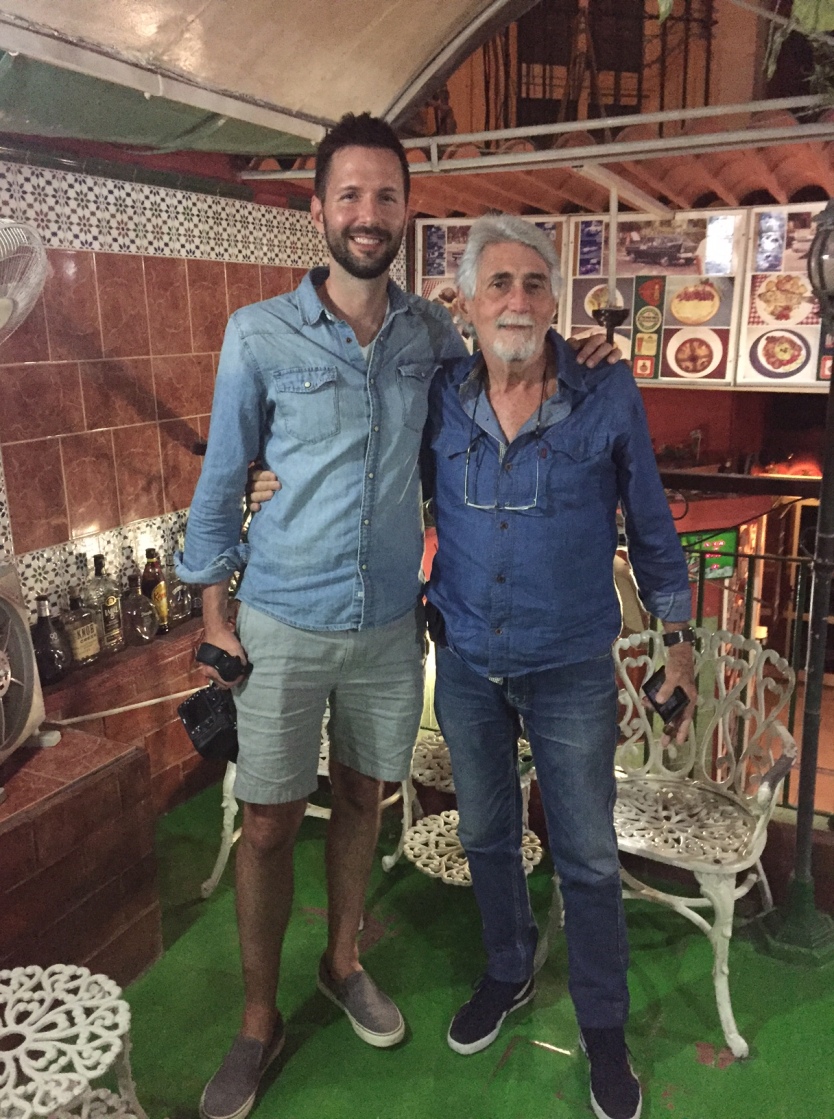 Should have held off on that high and tight summer fade. I look like a denim pencil. Gringo Viejo is killing it, though.

Next morning, we awake in our casa particulares, grab some desayuno, and head a half an hour west out of Havana to Fusterlandia—an ongoing mosaic project depicting milestones in Cuba’s history, started by José Fuster 25 years ago.

Similar to Isaiah Zagar’s work in Philadelphia, Fuster’s mosaics have spread from his insane compound, down the street to bus stops to retaining walls, to kindergartens, all the way to downtown Havana. They’re quite magical, these scenes, which delve into some serious national issues whilst retaining a childish Pee-Wee’s Playhouse aesthetic.

We move on, back through Havana, along the same lap we did the night before, just more detailed and at a slower pace. Rafa senses our itching to get out of the car, stops the Dodge, says ‘adios’, and tells us if we’re robbed, we should try to catch the thief as there’s a mandated 8 year (at least) prison sentence for Cubans who rob Americans (any tourists?). Sure, let me just slip on my track shoes… 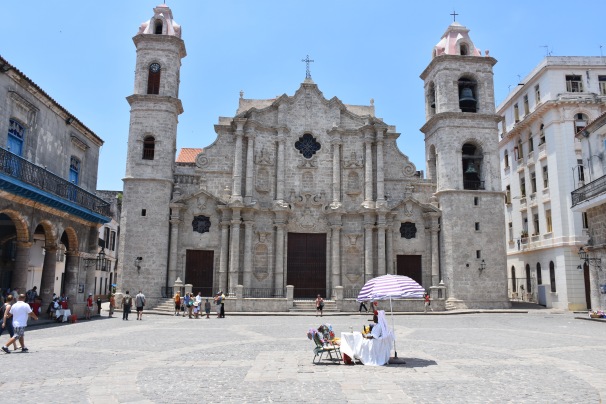 We wander, trailing sweat down random streets, receiving curious looks from the locals as we leap-frog into cafés for beers/coffee to get out of the sweltering afternoon sun. 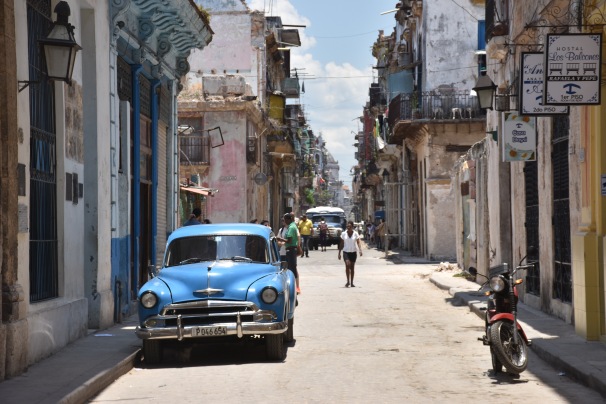 At night, once the temps finally dip below 90, we walk over to Fabrica de Arte – a slick venue for music, arts, food, and sarcastic commentary on the prevailing American winds (guilty)— it’s the scenester spot in Havana, like an interactive cultural playground with different media in each room of this old factory. By far, my favorite spot we hit up in Cuba.

Next morning we’re picked up by one of Rafa’s friends, who doesn’t speak a lick of English and looks like a henchman from the Fast and Furious franchise. We’ll call him Grillz.

Grillz silently drives us 2.5 hours southwest to a tobacco farm in Pinar del Río (more a bathroom break than anything). We tour the farm for a minute, drink  cuban coffee, buy two Cohibas to support the cause, and then I get into it with the proprietor (below), in terrible Spanglish, on why Lebron James is/always will be, better than Steph Curry. Cubans love the splashy Steph Curry…but this wily sports fan knows better. *

*During a retro-proofing of this post, just wanted to add the Warriors/Steph, blew a 3-1 lead.

We continue to Viñales, a bright little front porch kind of town in the middle of the karstic valley of the Sierra de Los Organos mountain range.

We take some pics, walk around a bit, eat some lobster in stewed tomatoes at a paladar and head back to Havana. If you’re planning to go to Cuba, spend some time in Viñales, rent a room/cabin and enjoy the nature. This was certainly the most pleasant, tranquil part of our trip, cut short by time constraints. A 6 hour round trip, back home in time to realize we’ll have to eat granola bars and split a mango juice for dinner and the rest of the trip as the supermercado has closed indefinitely, and we’re running out of cash.

Pretty pictures, amazing people, a burgeoning arts scene  — your classic Roam About weekend discovery trip, right? Yes, but Havana/Cuba overall is a logistical, mental, and physical grind. There are a lot of gray areas in setting up travel to Cuba for Americans (as you may have read in my last post), and the return/reward, for now, is minimal.

Cuba is about 30 years behind Russia in providing basic needs for its people. The supermercados are bare, the infrastructure is rubble, clean water is a major problem; the country is taking its first gasp of post-Soviet breath. Down the street from our casa particulares in the Miramar area, was a massive shelled-out Russian apartment complex next to a seascape strewn with garbage and rebar of some long-crumbled structure (above).You see the same building shells in places like Jamaica/Mexico/SE Asia/Russia, but these structures are the norm around Havana.

What you don’t see in the details of this ruin photography is the slurry of biohazards: discarded needles, soiled diapers, used condoms, and turkey vultures ominously circling overhead to feed on rotting (mostly dog) carcasses with families soaking in the water yards away.

Down on one of the nicer public beaches, Santa Maria, which we nicknamed playa hueso de pollo (chicken bone beach) families pack up their lunches in garbage bags, and toss them into the ocean on the way out. It’s as though Cubans have been mentally ground to the point of just not giving a shit anymore.

On our trip back from Fusterlandia, Rafa purposefully drove us through Fidel & Friends’ neighborhood of gated, palatial estates, conveniently showcased on the one access road to Havana’s main convention center. Quick turn right, half of a mile away is one of the largest, poorest neighbors we had ever seen. Hundreds/thousands of families just crammed into an endless makeshift shanty neighborhood of corrugated metal boxes and scrap wood, .5 miles from Fidel.

No illusions, nor need for commentary, just: ‘those are the rich Cubans, now here’s some reality’.  It’s gut-wrenching. And pardon my naïvety, as I’ve never seen the sociopolitical barrios of Rio, or Caracas, or Cape Town; the scenes of Havana were next level desolation.

I asked Rafa and Grillz about the opening of the country to Americans and they both seemed genuinely excited about the concept. But even with the prospect of a permanent pipeline of US tourists and an economical injection, there are those who remain skeptical of Cuba’s ability to thrive.

Take Grillz’s younger brother, who, “…got up from his chair, jumped on the motorboat docked in our backyard, waved goodbye to the family, and went to Miami. We thought he was joking, but that was a year ago. He never came back.” (His brother made it safely to Key West and on to Miami, if you’re wondering).

Cuba has remained one of the more confusing learning/travel experiences. Since arriving back in the States, I’ve felt a newfound appreciation for everything I have—the simplicity of this life, the conveniences, that I can freely state my opinions on this trivial blog. I also have a new respect and sentimentality for our neighbors in Cuba, who’ve lived through a mental shit show for almost a century, locked in a political ping-pong match.

If you’re looking for an authentic post-apocalyptic 1950s experience with beautiful people, spend the money, go to Cuba before sanctions lift. If travel logistics and having government folks keeping an eye on you isn’t your jam—to quote the US immigration officer who interviewed us after we were red-flagged (for having gone to Cuba)—”I have a list of several off-the-grid countries you could go to that aren’t Cuba.”