“How about Rome About Mike? No? When in Roam? No? You get that it’s R-O-A-M…do you need to go outside?” – Me, consulting post titles with my pupper.

We roll through customs after a quick 16 hours of travel and meet our driver, who’s holding a sign that says ‘Michael Butcack’ and even in Italian this is hilarious.

Surname thoroughly besmirched, we continue on with our dude, who looks like the vaping, hepcat version of Guy Patterson from ‘That Thing You Do!’ and if you get that movie reference, well, you get a thousand Steve Zahn fan points. 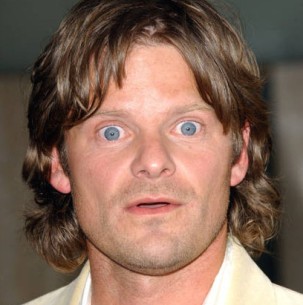 Upon entering Rome proper — already giddy with historical preparedness—I’m still somehow struck by how old this city really is: Baths of Caracalla (212AD), Circus Maximus (6th Century), the Forum (Betty White old). This is far cry from my hometown of Columbus, OH, where the longest standing building is a KFC from the early 90s that’s rumored to contain a handful of Pogs and a cassette single of the Spin Doctor’s Two Princes in its cornerstone.

Guy drops us off at the lovely Nerva Boutique hotel centrally located a few cobbled steps away from the Forum. Our wonderful front desk person tells us the room is ready (at 10am)! We promptly smooch him on all four cheeks, head to the room for a quick whore’s bath and we’re off.

We’ve all played this game before…easy, Tiger, it’s the one where you use all the storage on your smart phone just to get that ‘I’m the only person on the planet near this here ancient thingie’ angle in your pic. It’s the iceberg syndrome of reality that we want our 400 Insta followers to admire and like to send that sweet dopamine hit heart affirmation.

MmmMMM. Hit me! (but seriously, hit me up @Mike_Bukach, or @Michael_Butcack on Insta for pics of traveling, dogs,, and my traveling dogs)

Tip #1: The Colosseum, trying to hide from tourists behind some shrubbery. 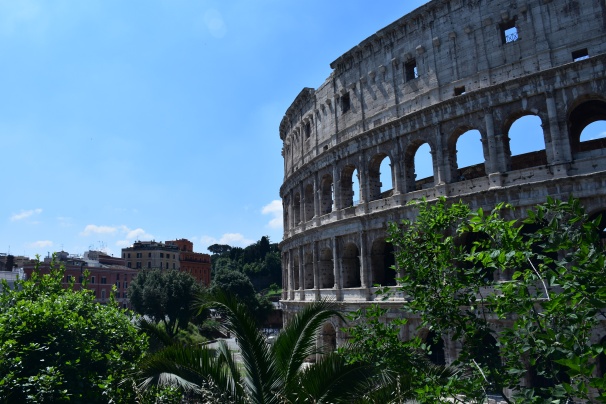 Reality: Here’s what the Richfield Colosseum actually looks like, hiding behind a construction wall. 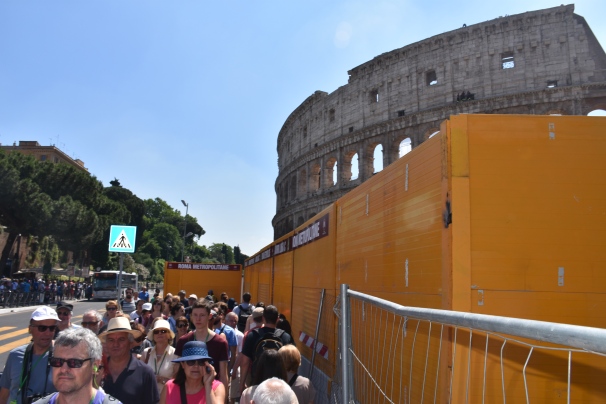 Tip #2: Here’s a picture of the Pythonanon. 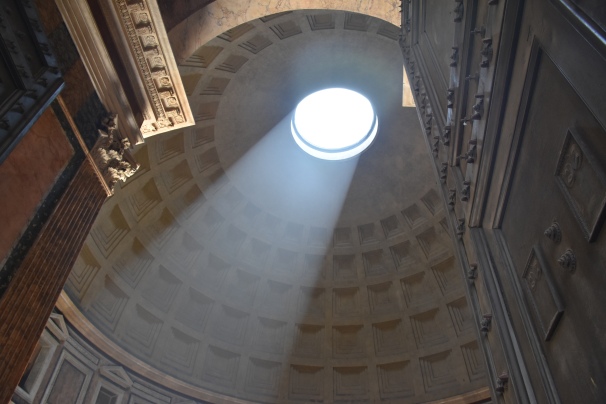 Reality: Pythonandonandon. Someone should plug that hole in case it rains. 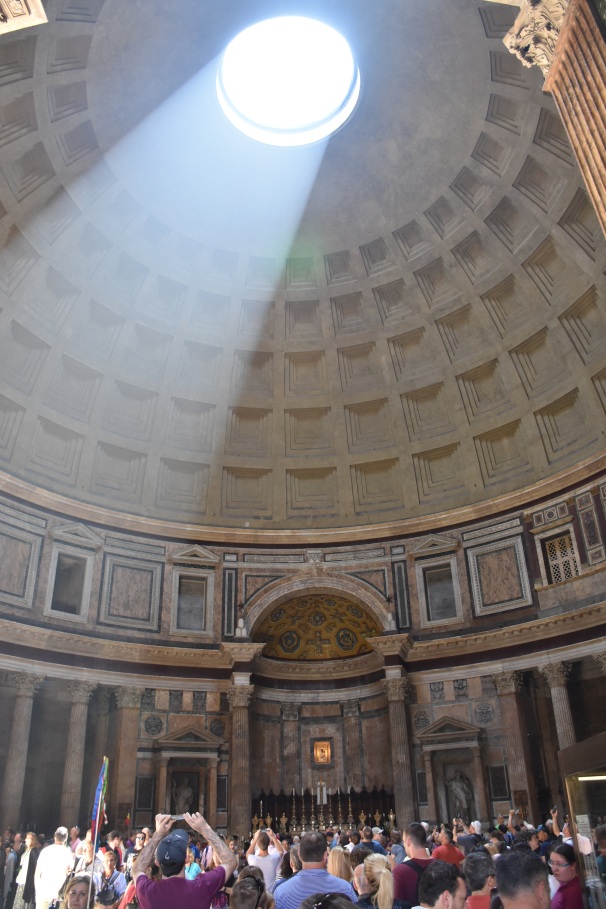 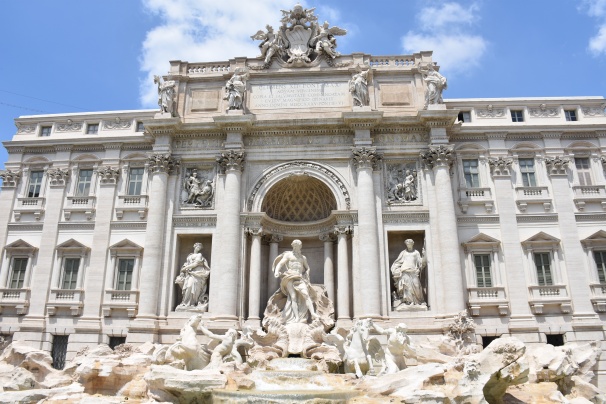 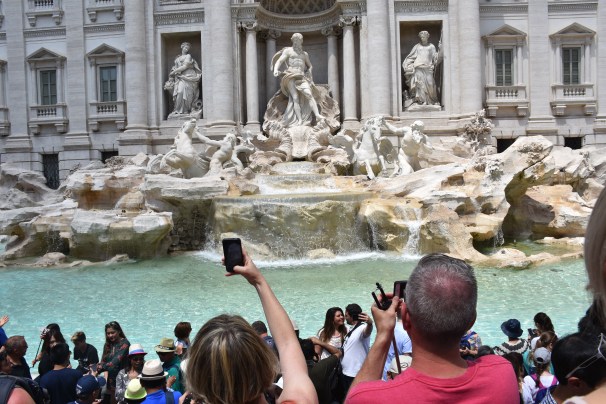 Wandering around, seeing the main sights of Rome is a dream come true that at times inspires goosebumps and to be completely transparent with my historical geekiness—slight arousal. 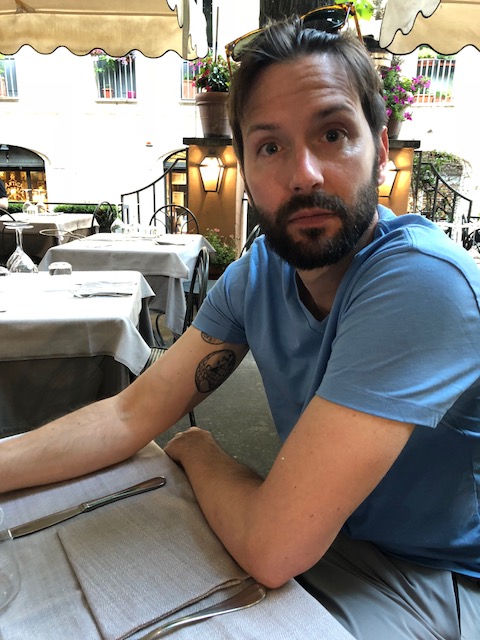 The WordPress folks said I should feature more pictures of myself to better connect with my readers. So, here I am, staring awkwardly into your souls like a stunned Bhagwan.

Even with the endless mobs of tourists, the locals somehow remain calm and collective are straight up chill about the controlled chaos. One Roman restauranteur apologizes for his “poor English” after I butcher their mother tongue in asking for a knife (I think I accidentally requested a small lizard).

Imagine, for a second, living in a utopian world where an American would apologize to a tourist from another country for not knowing their visiting language.

I love Italian food in a yum yum gimme some kind of way. With all the walking and touring of the beautifully kept, historical places in Rome, I somehow manage to only gain two pounds during our entire trip which is simply inconceivable as I housed food. Like, diaphragm cramping, can’t breathe very well due consumption kind of gorging.  Here are our highlight meals in Rome:

Grub stealing wife. Pouting ginger in the back. 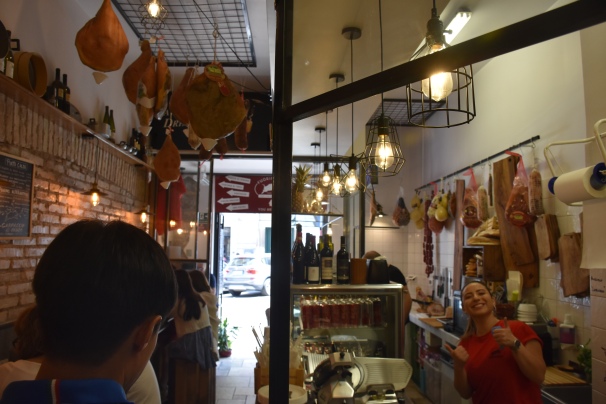 Sausage, chard and ricotta stuffed ravioli. Shout out to the folks at Colline who let us in 15 minutes before they closed and allowed us have one of the better meals of our trip. You guys are the best. Extra Medium $s spent. Mega happiness. Spare tire waist.

Pianastrada [Near Campo de’ Fiori]: Dinner. House white times two bottles, great bread, amazing pasta, details are a bit hazy, but we sat at the chef’s table and it was amazing and charming and here’s a pic of the restaurant below and if one of you folks go there, tell them Roam About Mike sent you and they’ll blankly stare at you and smile. Many $s spent.

I ripped this from their FB page. Free advertising, guys.

Forever and ever, amen.

It’s 7am and there’s already a massive, buzzing line-up outside the walls of Vatican City. I start to wonder two things: First, why isn’t this joint open 24/7? And secondly, am I going to combust upon entering?

We book a private tour through Walks Inside Rome, which is absolutely the way to go if you don’t mind paying a month’s rent on your pilgrimage to the world’s t smallest country. Apparently, our heavenly karmic euros work, as we’re granted physical and spiritual entrance without fire or brimstone. 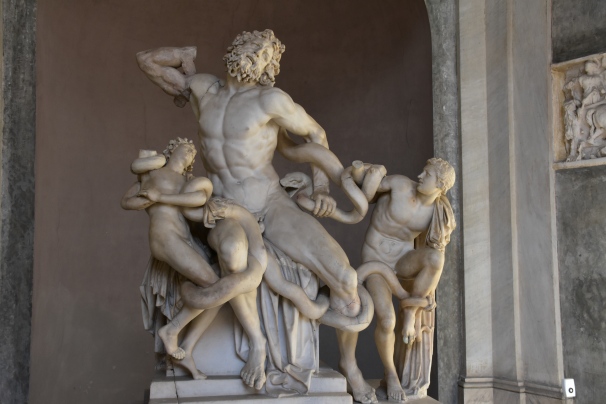 With over 25,000 daily visitors, we’re immediately enveloped in an overwhelming horde of white tennis shoes and necklace-clutching aunties as the Holy See grinds to a Monkey Do shuffle.

Our tour guide, Carmelina, does a wonderful job of bobbing and weaving through the pilgrims while Roam About Wife keeps facetiously whispering about how she wore the wrong outfit for this religious occasion (there are folks in your traditional Roman Catholic sweatpants).

It’s insane, but it’s all totally worth it. The Vatican museums and ‘campus’ is just non-stop —awe-inspiring corner after awe-inspiring corner. The museums are so stacked to the gunwales in ancient treasures, after about 1.5 hours of section after mind-blowing section of ancient, art-jammed rooms, we start to mutter to the CCTVs “We get it! What next?”

What’s next is the Sistine Chapel. And if that moderately famous piece of art weren’t enough, the Sissy Chap (as they call it) is followed by the most grandiose and humbling + our steeple is so much bigger than yours in St. Peter’s Basilica. It’s an unbelievable sight to behold. Frankly, it’s too much to take in at once and at the time of this writing, I still can’t help but wonder how much the whole thing cost to build. Quadrillions, maybe? 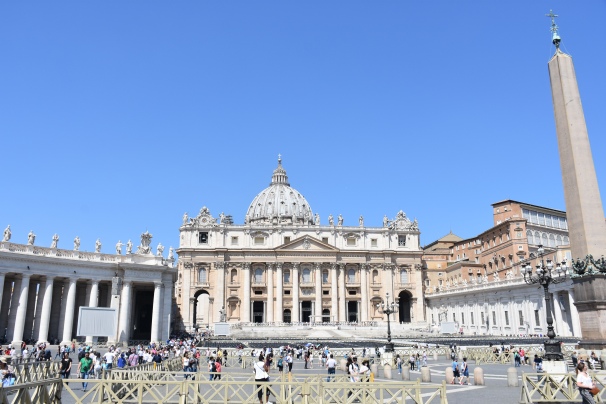 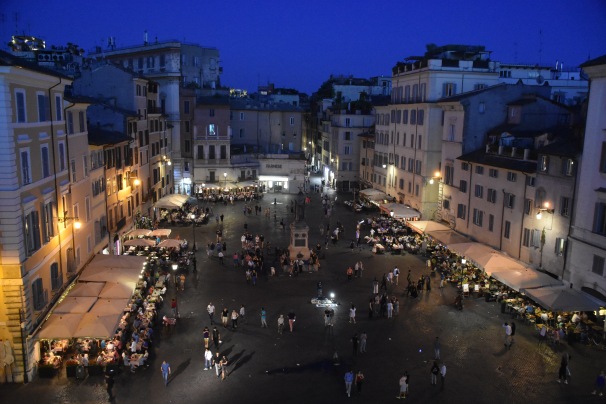 Sundown. Lost in the twisting alleys around Trastavere, eating post-dinner gelato in a poor attempt to offset the grappa. Waddling along the Tiber and peaking into cozy cafes even though we just ate like fours meals in one. 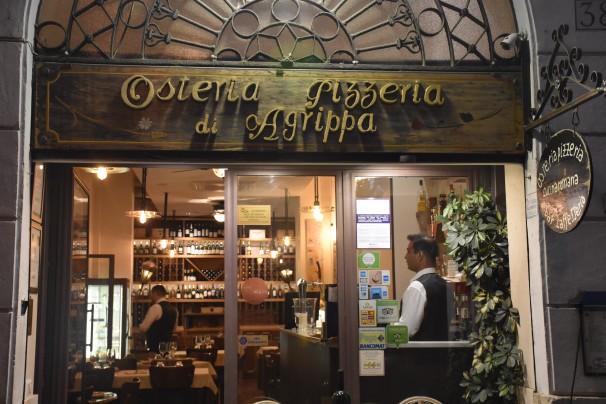 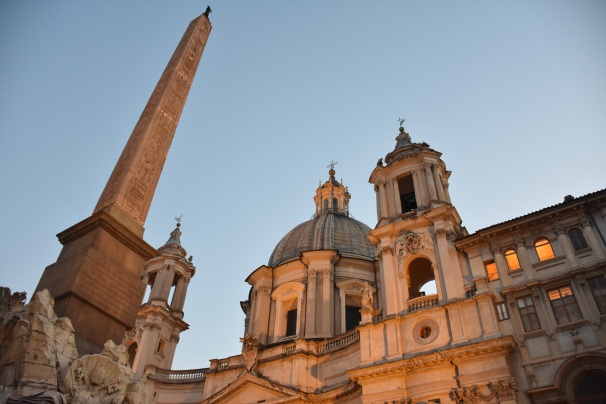 This is real Rome. A blend of the new and trendy. 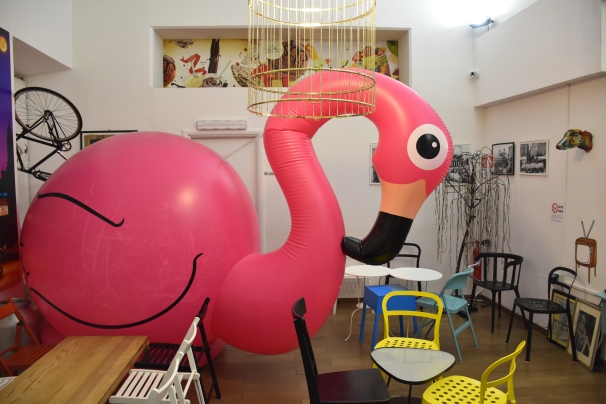 The not so new but stoically stunning (to be fair, the wedding cake below, as you Italians call it, is older than 95% of the US). 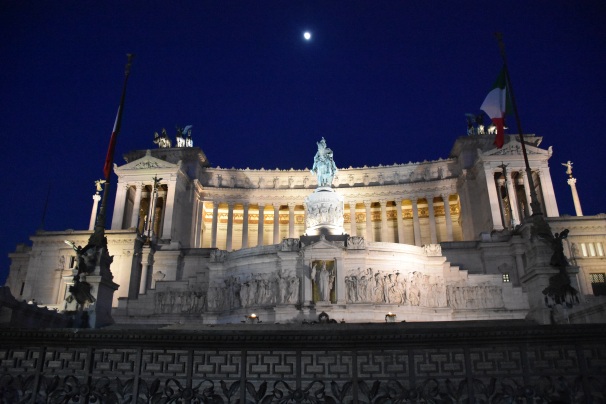 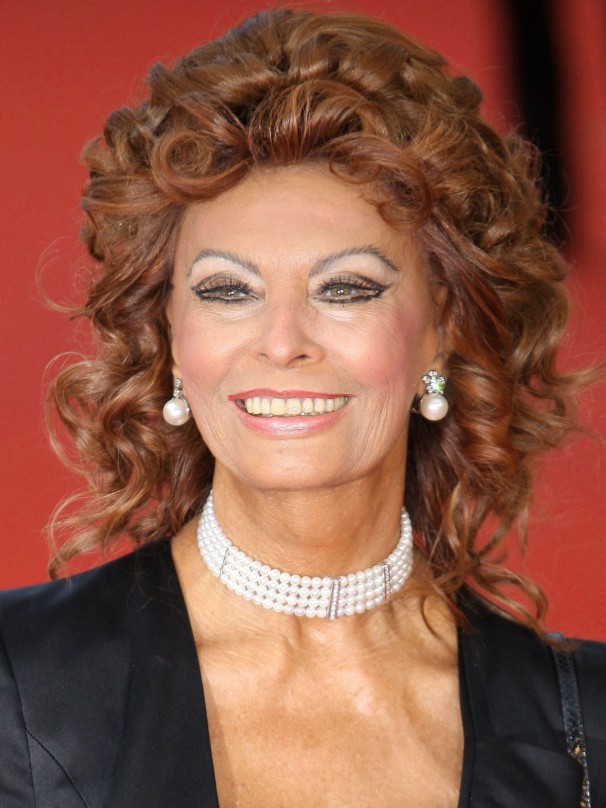 Of anywhere I’ve traveled on this globe, life seems to blend the most seamlessly in Rome, where locals have been grooving for so long, the good life just permeates organically for and from its people.

And while we were only in Rome for two slow blinks of Sophia Loren’s telescopic lashes, it quickly settled in as one of my favorite cities.

After swapping digits with my homeboy the Pope, we move onward from the Italian capital up north to the Ligurian Coast for more misadventures.

Next time on Roam About— Cinque Terre vs. Amalfi: A Civilized Death Match