Mother Nature has been quite the tease this week, giving Columbus empty hopes of an early Spring in the form of 70+ degree weather. Before Ma Nature could pull the proverbial plug by creating a forty-degree drop in temperature, sending panicked, leaky-sinus induced riots to the psuedoephedrine  section at the local pharmacies, I decided to take advantage of the weather, and hike at Highbanks Metroparks.

Highbanks (located here: http://g.co/maps/g6xrg) is a 1,150 acre haven away from the hub-bub of High Street (Sure, Columbus isn’t at a suffocating L.A., or New York traffic level by any means, but if you mutate into the Hulk due to horrible drivers of C-bus like I do, you can play a little game at Highbanks called, ‘Bring down that escalated blood pressure, kind sir, or you’ll pop a gasket!’). Tangent, sorry, back to the point – Highbanks has become one of my favorite relaxation points in Columbus; it has seven gravel/dirt trails varying from easy to difficult surrounded by peaceful beauty of the hard-wood forest. You’ll see folks, young and old, taking leisurely strolls, jogging – and those brave-souls who do marathons – sprinting by in Spiderman inspired garb, but polite to pant ‘hello’. There are picnic areas which are usually quite crowded on nice-weathered weekends, dog walking paths, and an excellent Nature center where you can learn about the area’s history, geology, and animal-life.

One of my favorite hikes starts at the Nature Center in the moderately difficult Dripping Rock Trail (2.5 miles). The Trail dips down to an Adena Burial Mound dating back to 700 b.c. It’s an unassuming looking hill, this Adena Mound, and honestly, I would never have noticed it if it wasn’t fenced in and marked with a commemorative plaque.

Do not build your house here, Craig T. Nelson.

If you happen upon the Adena Burial Mound alone, and you’ve seen the movie ‘Poltergeist’ one too many times in your life, a quick picture, an audible “Sorry to bother” will suffice. I advise quickening your pace in leaving this area.

After the Adena Mound – the Dripping Rock Trail heads down to the (2.3 mile) Overlook Trail. A few steps in on the trail, there’s a little unmarked pathway that takes you to the Pool Family Gravesite – a family of frontier-folk who first cultivated the area . The path is difficult to find in the summer, but in the winter you can see the headstones and fence from the main trail. The Pool Family aren’t physically buried there, just the headstones, which is good because you’d have to deal with a full on Frontier-Folk vs Native ghost war on the trail.

Overlook Trail rolls along peacefully (the sun-bathed picture in the slider was in this area of the park) over bridges, past Prehistoric Earthworks (an early irrigation system according to the placard on the bridge) to a platform overlooking the Olentangy River. It’s not the most beautiful place during the winter, as the sparsity of tree cover exposes some high tension wires in the distance, but there is still a stark serenity about it; standing on million year old bluffs, or the high banks (namesake!), taking in the scenery.

That is, until fighting squirrels scare you out of your deep meditative state.

Back on to the Dripping Rock Trail, marked by a WoodPecker symbol you will pass through the Big Meadows Picnic Area up passed the day camp on the way back around. On the pamphlet for Highbanks, there’s a picture of a bald eagle, poised valiantly, preparing to rip some poor creature’s face off. I did not get an opportunity to see a Bald Eagle, but was openly mocked by, coincidentally, a Woodpecker. They do laugh at you in a high-pitched cackle, just like Woody the Woodpecker from the cartoons, but don’t take offense; be magnanimous, for any creature who bangs its head upon a tree repeatedly day-in day-out has no right to mock and is probably just suffering from a chronic concussion. 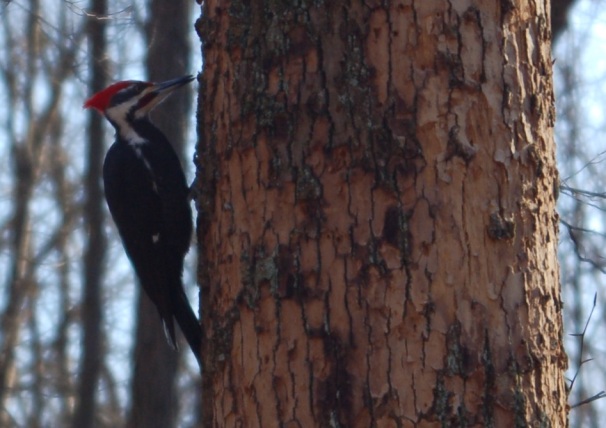 I’m funny how, I mean funny like I’m a clown, I amuse you? I make you laugh?

Dripping Rock Trail loops back around to the Nature Center, and if you haven’t had a physically active winter, you’ll be pretty tuckered out. The hike I’ve listed is consistently moderate-to-difficult (approximately 5.5 miles with all the little branching paths), but a great reason to get outdoors to soak up some nature; to get in a free workout outside of a stinky gym; to escape the city, even it’s for just a few hours.