I’ve had a secret crush on Lindsay Lohan for a long time.

It’s ridiculous, I know; could be her Ann Margret sexuality meld with the plucky, happy outside/crunchy badass train wreck inside – I love it. Or, loved it.

Lindsay and I have a shit ton in common.

She started her career as a model

She went on to have a successful acting career.

I starred (one time) on ‘Three Men And A Chick Flick’ on the WE channel. And was a frequent-visitor of the gone-too-soon ‘Living it Up with Ali and Jack’ on CBS. I was also an ‘uncredited’ extra in ‘Strangers with Candy’ the movie, and was a featured prisoner in Godsmack’s ‘Awake’ Video.

I have millions of penny halves.

I met double L once – the origin of the adolescent crush.

This was 6 or 7 years ago in NYC at the Coffee Shop in Union Square where I was working a promo event for Napster,  paid to listen to music in the “Napster lounge” while big-wigs, and “hip folk” mingled. My boss paid $11,000 for Lindsay to come in for a half hour, talk with some of us while the cameras blasted away to boost the Napster brand.

Lindsay ran in through a wake of paparazzi – looking like a beautifully crazed ginger pole cat. She headed straight for the back room where she proceeded to down a half bottle of tequila like a pro (she was 18-19 at this time). She went to the little girls room to…powder her nose? Ten minutes later, she came out, and headed my way.

Me – Oh my god she’s coming over here to kiss me goodbye.

Me – “I’ll take you anywhere, Lindsay. France, Maldives, New Castle, Pennsylvania…my 12×7 jail cell bedroom that gets no light but is totally cool because I live in the East Village.”

“Oh yes, Mike!” Lindsay, in my brain, kisses me passionately. 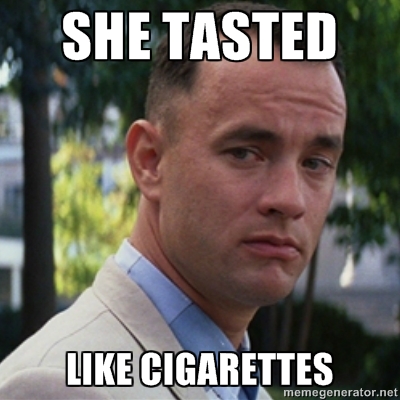 Real Lindsay walked up, looked deep into my soul, grabbed a Napster mp3 player from my listening station, turned around, and ducked out the door into a limo –  gone forever.

OK, so I didn’t “meet” her per say, but there’s a picture of us together somewhere; me ogling her, looking semi-retarded, quarter cocked – her in complete control. There was something in there…that ‘I truly do not give a fuck’ attitude that hooked me. She was the epitome of badass – a young, gorgeous, bitchy, red-headed, sexually charged middle finger to the paparazzi, marketeers, branding, you, me, and everyone.

Arrests, fights, money problems, and drugs have been Lindsay’s modus operandi since our Napster meeting; this, nor candid pictures of her in court, or wasted at clubs could deter my crush – just Lindsay having a good time…

I mean, we can’t look good ALL the time.

Then, I saw a pic of Lindsay the other day, and the crush was KO’ed.

She joined majority of Hollywood starlets and stars down the path of fake plastic poofy cat-face, at only 26 years old.

“I’m trying to smile, but my nose job,and lip injections are fighting it.”

Botulinum Toxin, or Botox (common nomenclature for those who don’t want to admit pumping biohazard in their face) does serve a legitimate purpose in helping people with chronic headaches. Outside of migraine alleviation  – it’s a protein poison injected in your forehead/cheek area that paralyzes the muscles to give an expressionless, smoother look. Combined with a face-lift – the permanent look of someone sticking a surprise digit in your butthole (see Kenny Rogers Below).

Botox is obviously not my cup of tea, and I find noticeable, voluntary vanities disturbing; a complete turn off. Unfortunately, the mortality scares and image obsessions trickle down to real people. The nip here, the tuck there, the nose jobs, the lip injections, Botox; covers of magazines used as comparisons in the mirror.

The Lindsay’s of this world are showing girls, men, women that it’s okay to not like what combined genetics gave ya. With money, insecurities can be operated away like the fine gallery of folks below:

You gotta know when to fold, Kenny!

This face brought to you by Dr. Culty McSciFi

Age gracefully, and naturally as possible, without enhancements. If you want to look better – you gotta feel better, eat healthier work-out, hike, stop smoking crack, crank or snorting lines, meditate, get outside.

Me? I’ll Kris Kristofferson-it over Kenny Rogers any day. So long, Lindsay. – Mike