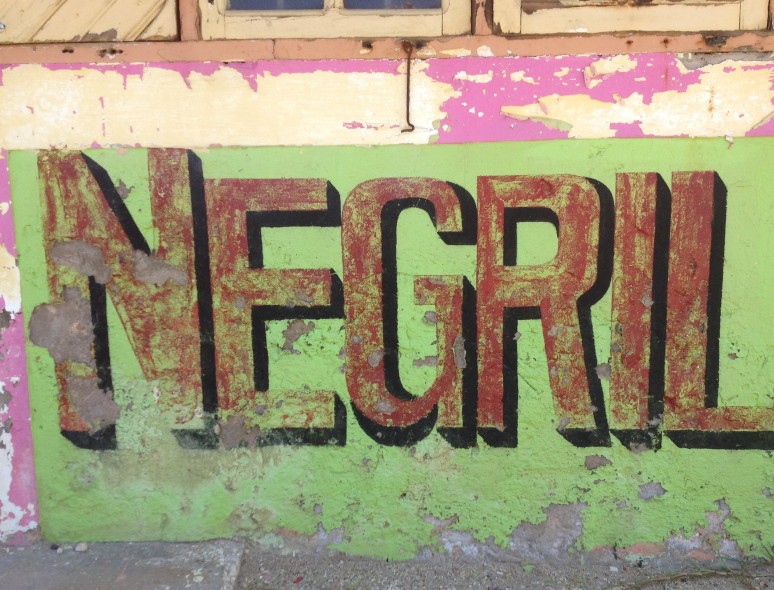 The Bad: No beating around the bush — Jamaica is a poor nation (97th GDP/capita, out of 187) . The country’s economy has been on a rickety roller coaster since the 70’s resulting in high unemployment rates, inflation, unfinished or abandoned houses/shanties/infrastructure and a (current) dependency on tourism for a quarter of all jobs. It’s also a very violent country with a severe, legal anti-gay (read: lynch-mob) mentality, and the 6th highest murder rate in the world.

It’s hard to shake the echoes of the colorful legends I’ve heard over the years: “While we were in Jamaica a tourist got shot for stepping just outside the border of a resort…” and “…dude totally got hacked with a machete” and “I knew a guy who got kidnapped trying to buy weed.” Then, the banality of “we never left the resort” which I always assumed was a wink-wink PC way of saying “we never left the room”.

It’s easy passing surface commentary on Jamaica’s drab socio-economic situation from the passenger seat of a taxi, whilst sipping ice-cold Red Stripe on the way to a luxury spa resort. We (friends) pass garbage-piled shanty after garbage-piled shanty —not dissimilar to say, Detroit — but framed by stunning mountainous jungle landscape. And even with the bad voodoo stories in my head, I don’t want to just lounge poolside; i want to get outside the froufrou, and explore. 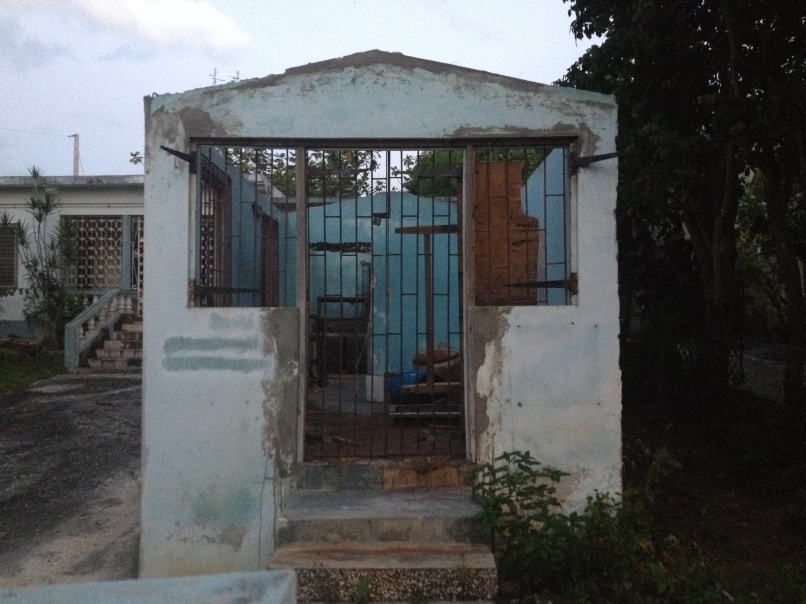 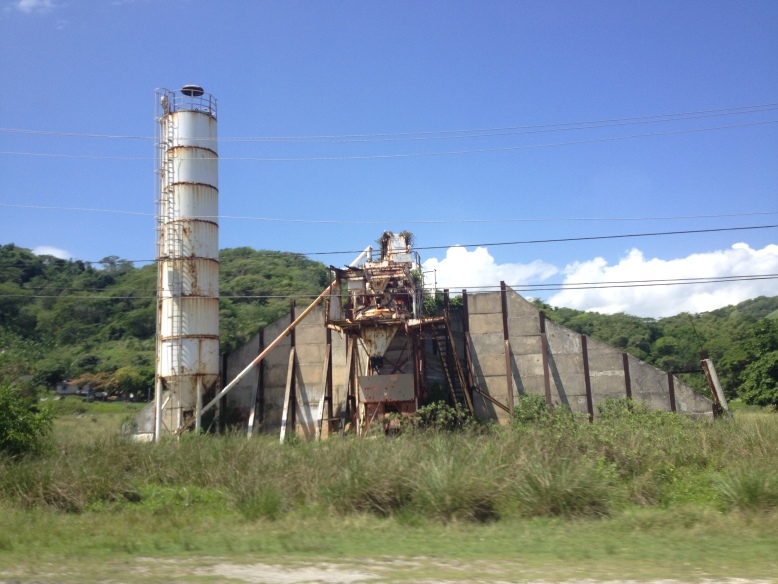 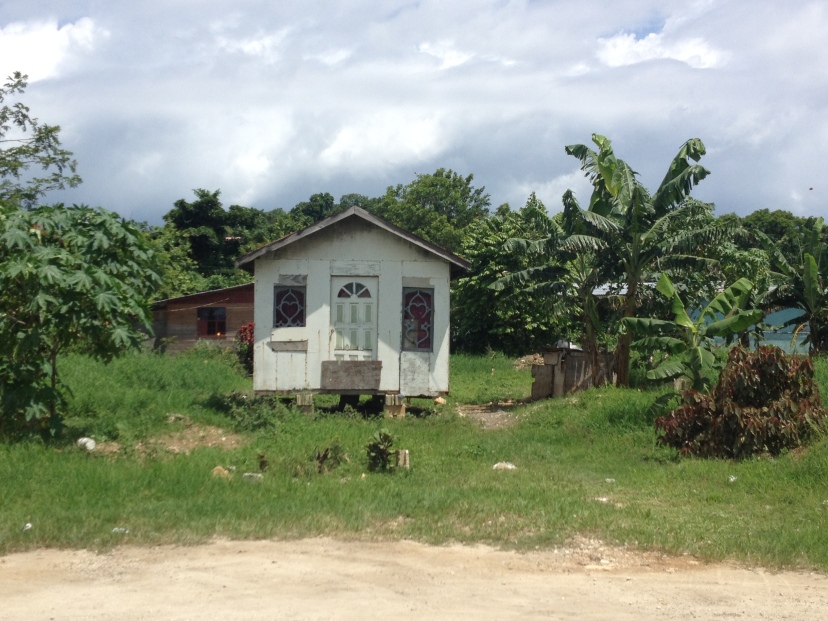 Majority of Jamaicans we meet along West End Road/restaurants are kind, open, and happy to chit-chat about World Cup, World Games or generalities. But there are a brazen few who shatter the comfort bubble, especially when traveling with attractive women, specifically targeting my tall, curly-blonde friend, Bones.

Bones receives some cat-calls at first, then, flamboyant invitations. She’s a good sport until ignored “invitations” grow to invasion of her space, then aggression.  We get circled by a couple of locals on a beat up motorcycle walking back alone from dinner the first night.  After a few smiling ‘no thanks’ to buying weed, we’ve, according to the passenger, “disrespected the Jamaican nation”. 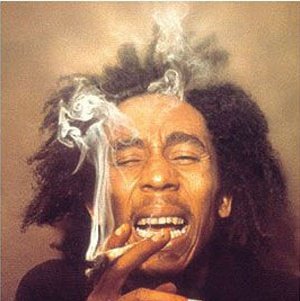 I’m offered a joint again, and give a more terse ‘No. I don’t smoke’, which causes a dramatic and angry exchange of Patois between driver and passenger and hostile finger-pointing towards Bones. They peel-off down the street a bit, still yelling, then circle back towards us. Whether or not it’s for show, I’m not about to fuck around with spidey-senses going off. I calmly walk us into a run down but very conveniently open general store, and we buy a grocery bag full of Red Stripe waiting for the motorbike to leave.

Giving it another go outside the resort, vibes are weird again the next day walking to Negril to get cash out of the ATM. The attempted weed sales are non-stop the entire 10 minute walk downtown, which, isn’t any different from aggressive hagglers anywhere in the world and let’s be honest, weed IS legal here in the states (CO & WA), but I don’t want to spend three days in the Jamaican slammer buying off an undercover.

The misogynistic machismo is certainly an eye-opening experience, and the two females in the group ignore the comments, but I can tell they’re on edge. Just before town, a smiling dread-locked dude cooking salt fish on a makeshift cart goes deadpan, and very seriously says, “Don’t stay in one place for too long, mon.” I think he’s looking out for my pasty-eastern european skin being so close to the equatorial sun, but quickly realize he means ‘keep moving’. 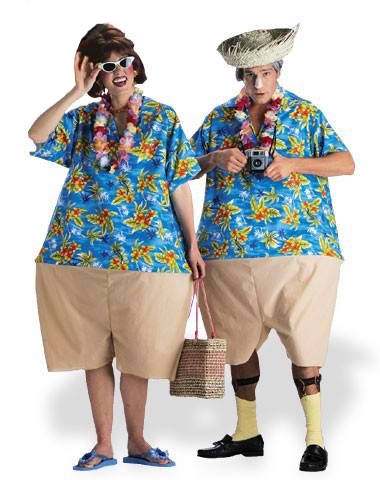 I also realize much too late that grabbing cash out of an ATM booth in downtown Negril without a taxi waiting is a dumb fucking idea, and for the first time in my life, I’m glad I don’t have my trusty Nikon in tow to make me look like a complete tourist. We’re watched, touted relentlessly, and followed for an uncomfortable distance even after ducking into a souvenir shop, where the proprietors get pissed when we don’t buy the chintzy “local Jamaican goods” made in China.

Another instance in a restaurant later that night, where things really go south when a gentleman strolls in and after a drink, starts trying to rally the other male patrons gesturing (sexually) towards Bones. It takes a lot to do so, having once visited a remote village in Turkey that started grabbing her hair because they thought she was Shakira, but the situation has rattled Bones and she smartly asks that we finish dinner and get the hell out. The crew decides not to explore Negril anymore, and past stories bear the unfortunateness of rapey fruit.

What? You can’t do that, Mike! You can’t have both!

The West End, or cliff side of Negril is absolutely stunning. The resorts and massive Moroccan/spanish style houses built right into the sharp coral rock all the way down the coast create a paradisal landscape. The Spa Retreat is amazing —the staff, incredible. Waking up everyday in a jungle paradise 20 steps away from pellucid turquoise waters deciding whether to eat a fruit cup for breakfast, get a massage, or go snorkeling (again) is really, really tough. Relaxing is exhausting. 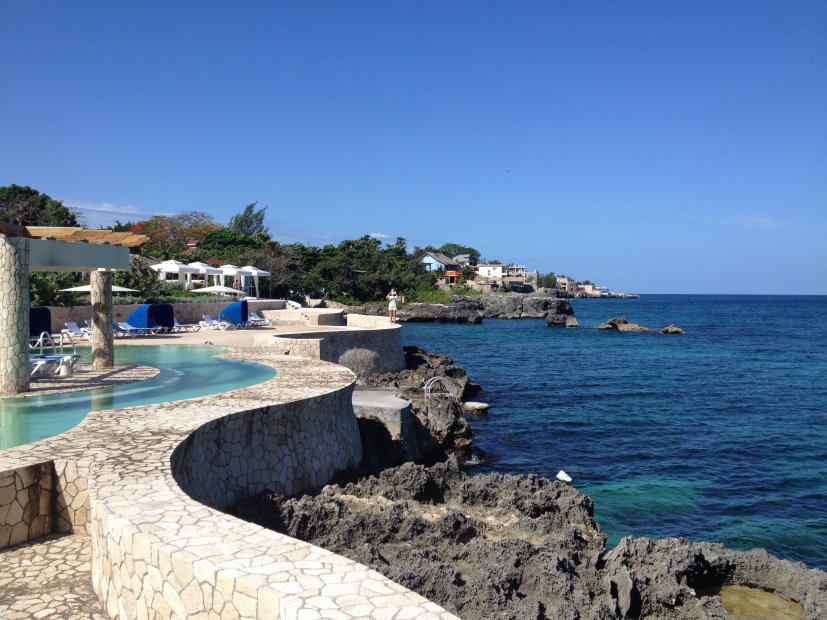 3 Dives  – Restaurant on the water- basically a pavilion with picnic tables underneath and a shack where the cooks prepare everything.

How do they get their food? Well, while we’re sitting there, two divers come up from the cliffs with a couple mesh bags filled with various sea creatures. A tall dude walks in from the street with a massive bag of shrimp on his head. 3 Dives proprietor hands over the cash, shrimp becomes a tasty grilled special. Ocean to table. 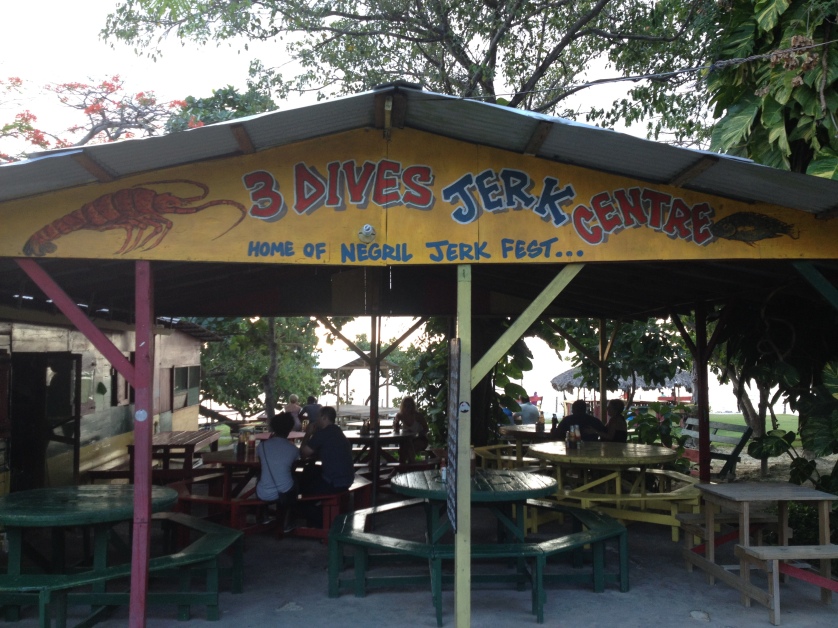 I have the conch with ochre and peppers, served with rice and beans, and collared greens. There’s homemade fire sauce on the table, capped with tinfoil. So hot. So good.  Top 5 meal in my life.

Chicken Lavash – another staple on West End. I get curried goat with veggies. Somehow 4 or 5 Red Stripe slip down my gullet while I watch street traffic and boats sail by in the background. Easy-breezy. 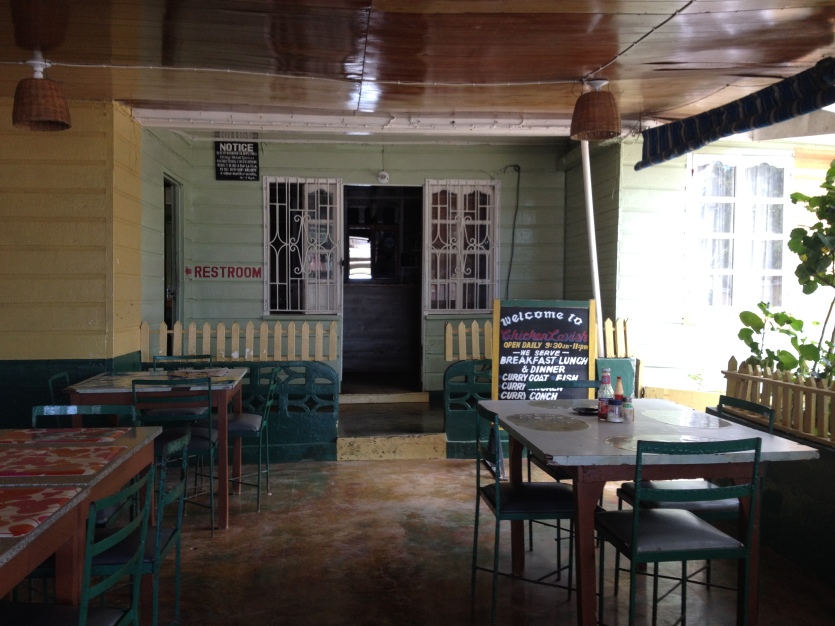 Snorkeling – No lifeguards, no buoyed boundaries, no worries – freedom to swim all the way to freaking Cuba. Where most resort area reefs I’ve seen were depleted of any sea life due to over-fishing/constant sun tan-lotioned patrons, this reef is like swimming in a carefully curated exotic aquarium. Barracuda (inevitably getting the song of the same name stuck in my head for hours), sting ray, lion fish, sea urchin, clown fish, jellyfish, with a constant flickering of reflective light on the colorful sea floor visible for seemingly a hundred plus feet; it’s overwhelmingly beautiful.

I see a bored-out conch shell buried in the sea floor and dive down to get it ala Jacques Cousteau bringing it back to the Spa Resort. One of the bar tenders sees me emerge with the conch, and says he’ll clean it up. He sands the conch, slaps some varnish on it, and brings it to me the last day of our stay – one of the nicest things anyone has done for me while traveling. Thank you, Tonnis.

R&R – I won’t tire you with more of the vacation side of things, but this was the first relaxation trip I’ve been on since Tulum, Mexico three years ago. This left a lot of time for reflection… 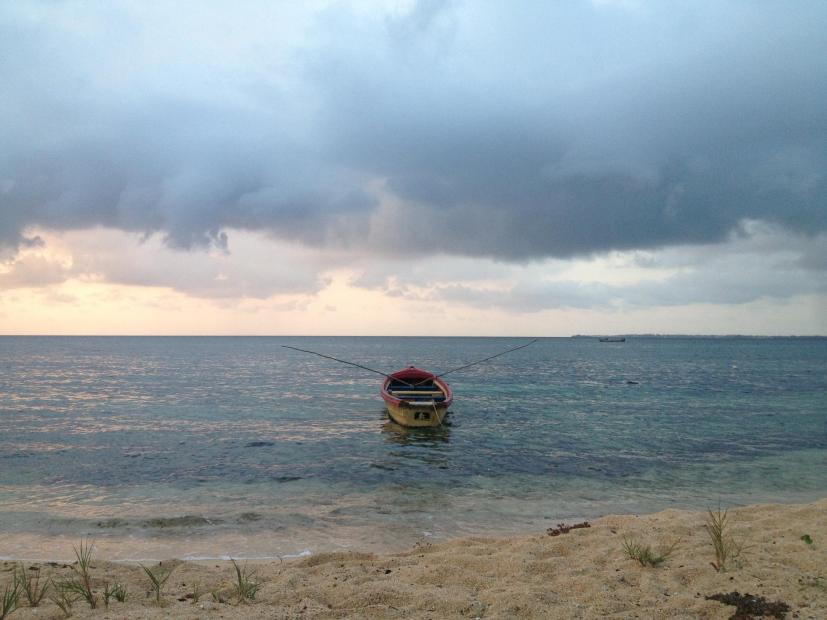 I both love and loathe Jamaica. It’s one of the most beautiful places I’ve ever been, and has such awesome people. There’s also the bad side, the side that made me say, for the first time in all my travels, “We should have stayed at the resort.” No wink wink. No nudge nudge.

Let’s hope the little dude in the picture below picks up the warm, beautiful, easy-breezy, open-minded side of the cultural ethos of Jamaica. 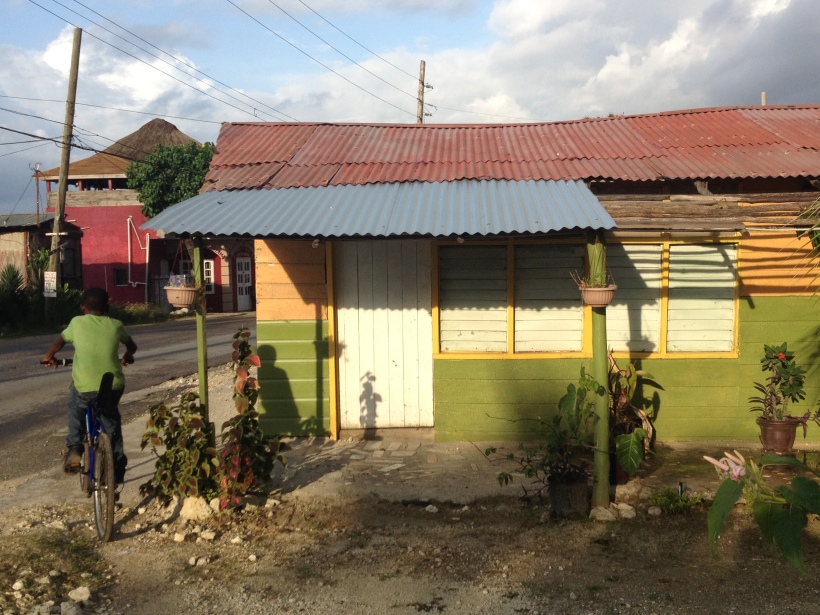 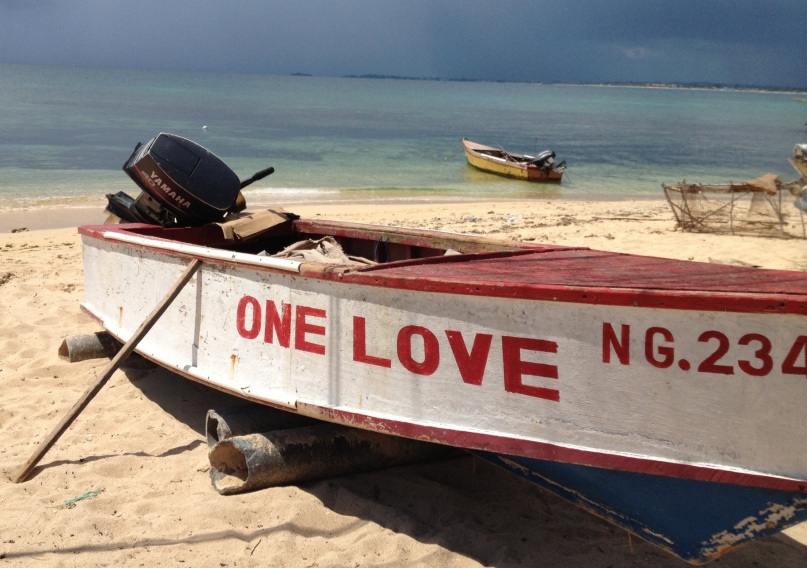