A Steamy Weekend in New Orleans

Things start off shaky in the French Quarter as the Ursuline Guest House we’re supposed to stay at is closed. Let me rephrase; it’s completely shut-down – locked up and empty. The confirmation number in hand,  befuddlement arises.

Turns out, the Ursuline got bought out by the Inn on St. Peter two weeks before our arrival. No notification, or ‘Hey, sorry but…’. Our reservation is moved to the Inn on St. Ann’s new location, the Marie Laveau. A bit confusing, but I’m more skeptical of our new spot’s namesake as Marie Laveau was a famous Voodoo Priestess, and the cottage/inn where we are staying – her former residence. Great.

Hotels are not my forte, and I won’t be applying at hotels.com anytime soon, as I can sleep anywhere –  long as the place adheres to three rules: 1. Stain/bug free sheets. 2. No stabbing in the face by murderous hoodlums. 3. No getting buried alive because of a voodoo death spell  like Bill Pullman in the film ‘The Serpent and the Rainbow’. Aside from those three rules, I’m pretty laxed about hotels/motels/or wherever; it’s a place to sleep for a few hours, not critique the curtains.

Holy Sweet Mother is it Hot!

You may have thought the ‘steamy’ part of the post title was some sexy Anne Rice vampire/Roam About tie-in. Nay. I usually don’t mention the weather in posts, nor double-strike the negativity chart to start,  but the heat is a character in this story playing the ‘hard to breath, mind-numbing, instant swamp-ass’ role.  I soak through my shirt just walking two minutes down Royal Street. It’s 97 degrees (F) at noon.  No ocean breeze. No “dry heat”. No sexy. It’s like trudging through satan’s intestines. The myth of vampires being allergic to the sun, debunked. Really, vampires are just hung-over, mid-western man-boys reflecting so much sun off their pasty skin, they combust.

First impressions of the city are that of energy, color, and history. Walking around the Quarter you see ornate wrought iron balconies flowing with ferns and flowering hibiscus plants, gas lamps flickering in front of colorful Spanish/European influenced architecture, the St. Louis Cathedral, and farther north, folks milling about or fanning themselves on the porches of bright Creole cottages. The colors of the buildings get progressively louder, as though neighbors, and businesses alike are competing in some unspoken vibrancy contest. 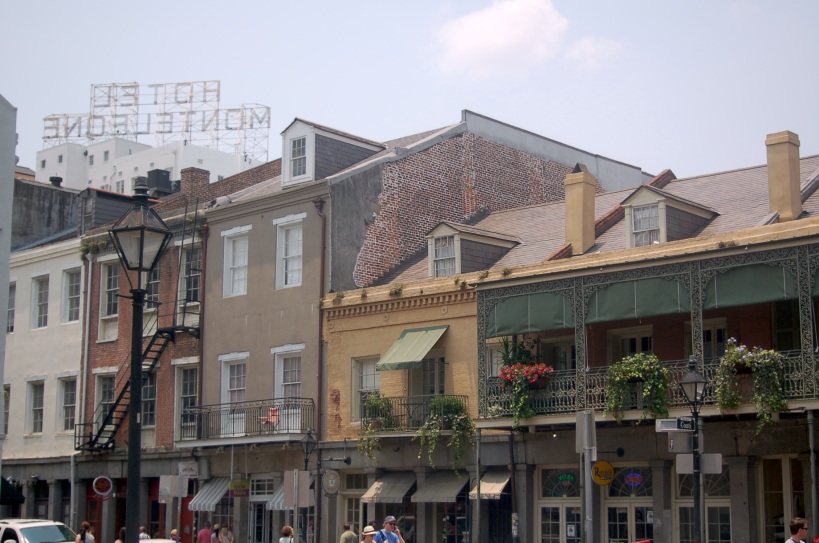 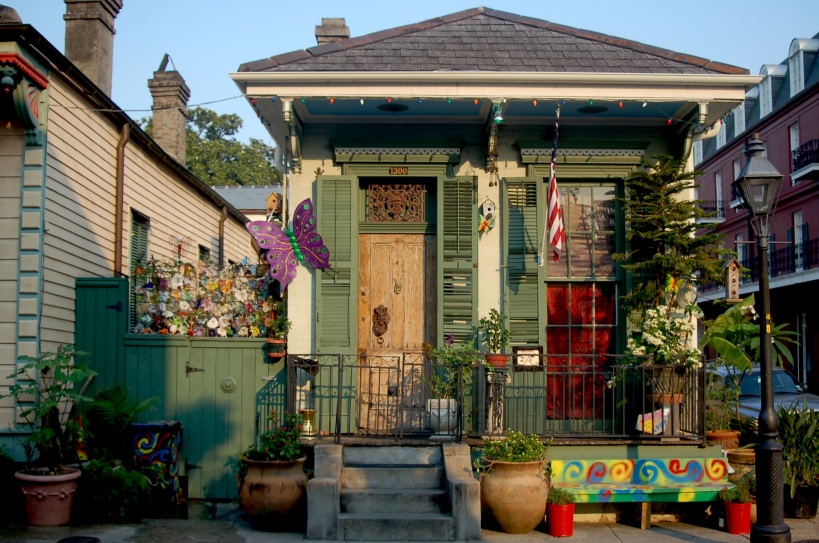 At night you hear Bourbon first, during the day, you smell it. ‘It’ being an incursion of stale beer, and sun-baked bodily fluids. Day or night, Bourbon street is a thorough mind f*ck. Turning the corner the first evening I get blasted in the face with a sensory cacophony of screaming, jazz, laughing, lights, house music, sex shops, hot dogs… two kids sprint by while the store owner chases them down yelling ‘Come the eff back here!!’; the kids have each stolen a pair of shoes. The crowd oozes like a lava-floe, swallowing up hand grenades, hurricanes, and other specialty drinks made of sugary swill and booze. A drag queen in Victorian garb with a powdered five o’clock shadow winks at me, while a broken-down stripper named ‘Mercedes’ tries to pull us into a mirrored foyer.

I hate it AND I love it. Did I mention it’s just a regular Saturday? Can’t imagine this place during Mardi Gras.

After a wobbly saunter through Bourbon, we cab it over to Mid City for some Rock ‘n’ Bowl action. It’s an eclectic scene; confirmed by the reaction of the opening band, Sons and Fathers, who look out to a crowd of Jesuit high-school bowlers, hoola-hooping tweens, and Conventioneers. It’s a bit suburban, but  a cool enough looking “venue”, with Ping-Pong tables, decent beer, good tunes, and who doesn’t love bowling?

New Orleans staple – trumpeter and crooner – Kermitt Ruffins rounds out the night , and I’m impressed with bassist Trey B (who you can see playing in the upper right quadrant above). We get an opportunity to chat with him for a bit – turns out Trey’s a classically trained bassist/ English major (friends!), who is first timing with Mr. Ruffins. Trey’s an overall great dude, and he graciously suggests we head to Frenchmen Street the next day, inviting us to his gig with local musician, Brad Walker, at Maison.

The next morning (early afternoonish, after a jump from some seriously strong coffee) starts with a circumvention around the French Quarter. The bottom of the Quarter is a delta of tourists and trinket shops, but there are hidden gems like the famous Peaches Records, and a few staples in the open-air French Market. A few blocks north and you find some intriguing art spaces, and boutiques. Over by Canal, which looks exactly like a Los Angeles strip but with street cars, over to the in-transition Arts/Warehouse district from decrepit old brick storage facilities, and factories to restaurants, art galleries, and lofts. 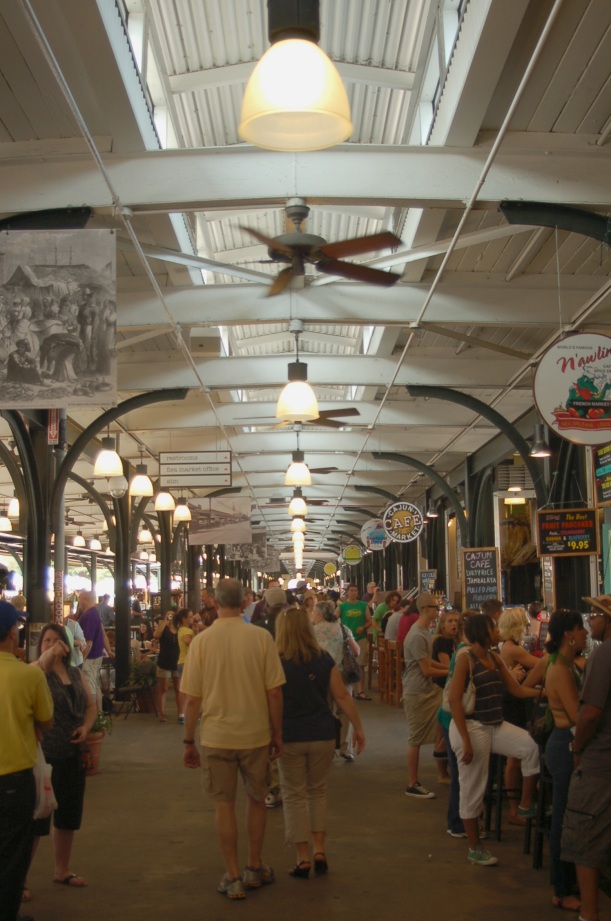 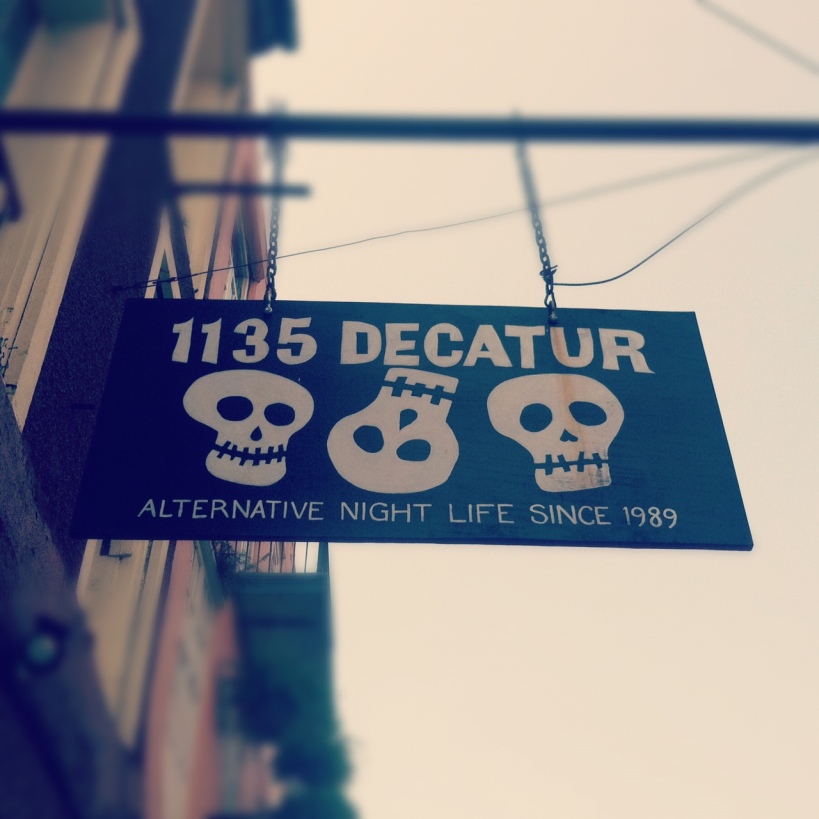 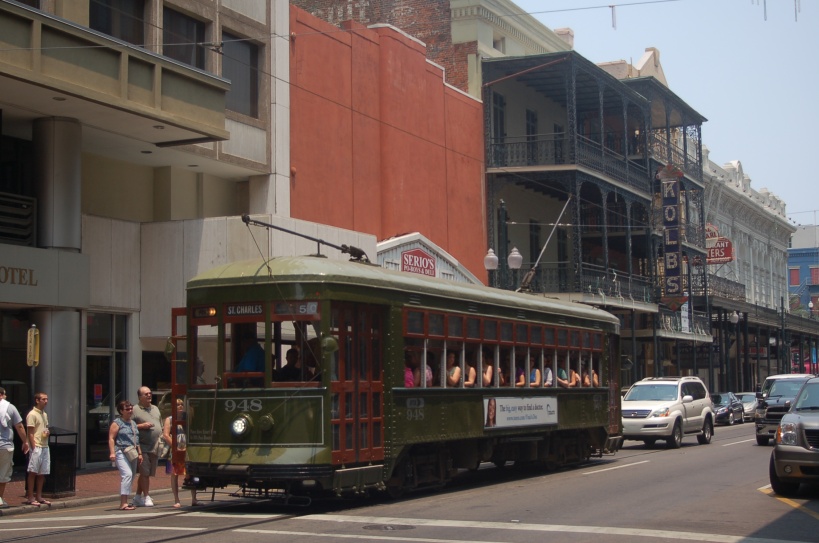 After walking through the Warehouse/Arts district for a bit the next part of the day we search for work by writer, Harry Crews, who I discovered while watching the dark, yet enlightening movie about life in the American South ‘Searching for the Wrong-Eyed Jesus’. Mr. Crews sadly died a few months back, and I’ve had a hell of a time finding his out-of-print works in Ohio, as everyone is eating it up.

We visit five different book shops within the Quarter, to no avail. The last stop is Dauphine Books, owned by a gentleman named Steve. There are piles of books everywhere – and Marti sort of rolls her eyes knowing I could snootily frolic among the towers of literary delight for hours like some skinny Ignatius Reilly, but I cut the book romp short; Dauphine has three Crews novels, including the gruesome and twisted ‘Feast of Snakes’. I buy the lot, promising the good folks who run the place I’d include them in this post. So, hello, Dauphine Books and thank you.

A heat-stroke induced siesta, then we stroll to Frenchmen Street – a colorful little nook east of the Quarter stocked with restaurants bars, galleries…and, once again, music. You walk in to a restaurant, there’s a band playing, step outside, band on two separate corners, into another bar, more music. It’s an incredible, spirit-lifting phenomenon. I wish my every day was soundtracked like this. Though, I presume having a trumpet in my ear while brushing my teeth might get a bit annoying.

After a great meal at Three Muses (review below) we finish the night at Maison, a great loungy/bar, listening to Trey run some bass for saxist Brad Walker. Then, things get happily blurry.

HOW TO GET FAT IN N’AWLINS

I was intent (content) on eating as much as humanly possible in New Orleans. Gumbo, Jambalaya, Oysters, Crawfish, you name it – right down my food alley. Initially, Marti and I fall for some so-so places that shove tourists in by the droves, pouring mediocrity down fanny pack wearing gullets.  If you do go to N.O., and please do, here are a few absolute culinary ‘musts’ exceeding the ‘wow factor’ to ‘holy sh*t’ is this good:

Green Goddess  – Exchange Alley – The GG is down a pedestrian alley perpendicular to the Supreme Court building. Probably the healthiest meal I would eat the entire trip, although I washed the Shrimp/Crawfish Remoulade avocado/Bacon Salad and a side of biscuits with pepper jelly down with a yellow Tomato Bloody Mary spiked with moonshine, yes, moonshine. And I fall in love with said Bloody Mary. Damn you, Green Goddess. How can you be so good ? 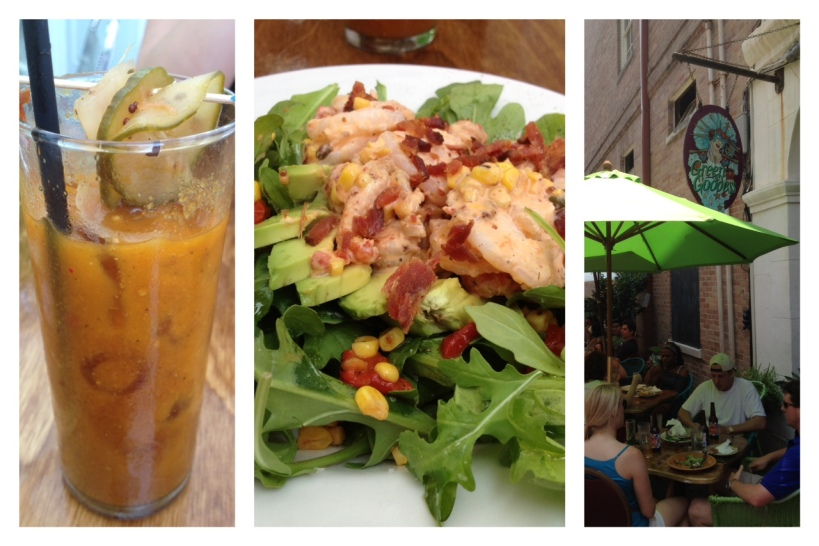 Butcher – The lunchtime offshoot of Cochen, Butcher rivals any of the snout-to-tail meat genre shops across the US. I finally get my hands on a Muffaletta (pervy sounding, and delicious); a traditional local sandwich of cured house meats with olive salad served with homemade potato chips. I get a side of coleslaw and a Mexi-coke. Delicious.

Verti Marte – Royal Street – This walk-up deli style stop is a local favorite, probably because they are open 24 hours/deliver, and Oh yeah, the food is freaking amazing. We grabbed some grub after the gig at Maison, and found a stoop down the street to park and eat. It was so good, we went again for lunch the last meal before our flight. BBQ chicken, jambalaya, mac and cheese, lima beans…heaven.

Three Muses – Frenchman Street – Perhaps there’s something to all this Mythology-in-naming-restaurant stuff. Going on recommendation from Trey B., Three Muses serves up creole-influenced tapas. Musicians, like the amazing blank play in the corner stage while you mow down death row, final-meal type bites – Crawfish beignets, Lamb Sliders, or my favorite, Tuna Tartar Tacos. What?!

A half block north of our voodoo abode sits Louis Armstrong Park, separating the French Quarter from the Treme – a predominately African-American neighborhood situated on what once was plantation lands.

He didn’t want his name used, but I shall call him Ollie.

Walking off some of the food around Congo Square, before our flight, an interesting fellow on a bike rides up, and decides to give Marti and I a complete history of the area. He tells us that before the American civil war, Congo Square served as a Sunday meeting spot for slaves to tell stories, dance, and play music under the shade of a giant oak tree (pictured below). Today, local Jazz musicians the likes of Herbie Hancock, and Allen Toussaint play free concerts in the same spot. Our kooky, impromptu historian is the groundskeeper for the park, though we never find out if he’s on the payroll, like a Groundskeeper Willy from The Simpsons, or if the services are voluntary.

Within Louis Armstrong Park sits the Morris F.X. Jeff Municipal Auditorium, damaged seven years ago during Katrina, neglected since. When Katrina assailed New Orleans in 2005, the US government dropped the ball directly the people of New Orleans. I’ll try not to get too preachy,  but know this: The after-effects of Katrina, the stained water levels on broken houses, on beautiful yet abandoned musical centers; the logistics of masses of locals being cut-off by insurance carriers after thirty years of patronage because of the area’s most famous mononym, still exist.

An outsider’s geographical look at the sub-to-just-above sea level of New Orleans, and it’s easy to say ‘well, it’s their fault for building a city in a fish bowl…’ But the same as people living in seismic zones of the Pacific Ring like Tokyo, San Francisco, or near active volcanos like Wyoming, or Indonesia, to the locals, it’s not just a place – it’s home.

New Orleaners have been through hell, and instead of being bitter, or carrying a grudge against sloth-like government action, they are by far some of the nicest folks I’ve ever met in my travels.  Always open to say hello, or offer help/suggestions, or just start a friendly chat. It’s hard to accept at first – this openness – but I came to really enjoy it each place I went. Meeting people like Trey, the kind folks at our hotel, at restaurants, at bars; the random people who just wanted to chat with us in the street, it’s easy to see the pride of their home- to understand the resiliency and the ability to withstand tragedy. It’s why New Orleans is a top global destination – it’s a hell of town – and I sincerely cannot wait to go back. – Mike

37 comments on “A Steamy Weekend in New Orleans”