“There’s a city in my mind

Come along and take that ride

‘Road to Nowhere’ by Talking Heads

Eight-hour drive from Columbus to Philadelphia – the trees in Western Pennsylvania awash in autumnal vibrancy- metronome-d strips of the centerline; blip…blip…blip.

The point of the trip: To see David Byrne and St. Vincent in concert. Sub-points 1, 2, and 3: To eat and drink and explore the fifth most populous U.S. City.

Crazy – driving eight hours to see your favorite artist. Does my fandom straddle the border of stalkerism? When does the line between ‘You’re amazing!’ become ‘I want to break your ankles so you can never leave me’ like Kathy Bates in ‘Misery’? 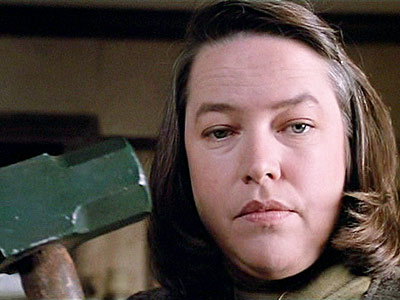 Marti and I throw our bags in the Old City storefront studio apartment rented for the weekend from AirBnB.com.

Right back on the road, blind trust in Googlemaps, which takes us on an interesting and, from an out-of-towners perspective, ‘bombed-out’ tour of West Philadelphia, and for some reason, I can’t get the theme song from ‘Fresh Prince’ out of my head.  The architecture of some of the houses is stunning, though, I wasn’t about to abandon the car to take pics.

We make it to the gorgeous/historical Tower Theater in tact.

No opening band, David Byrne and St. Vincent start right at 8pm – to the dismay of hipster-timers – and absolutely kill it. Never really keen on St. Vincent; she makes a new fan.

I realize, half-way through the show, listening to DB sing Talking Heads’ staple ‘Burning Down the House’, that the man is 60 years old.  Unlike some bands/artists attempting to still sound young – live vicariously through the established ‘name’ of their aged corpse – Mr. Byrne can still perform/sing, and sounds better than he did on early TH releases.

Back in Old City, a nightcap at National Mechanic’s – a pillared bank turned bar with eccentric (re: half a Whippet’s behind sticking out the wall, with a lightbulb for an… anus), yet warm décor. The house glasses have Edgar Allen Poe etched on the side – feeling at home, I order a few 10% beers that knock me on my ass after a tiring day of travel.

I’ve been to Philadelphia for work 4-5 times in the past. This “been” consisted of getting off the train, getting in a cab, traveling to some hotel downtown, or in Cherry Hill, New Jersey where I would spend the day in meetings, eating shitty hotel buffet, then shuttle back to the train station, ride back to NYC. 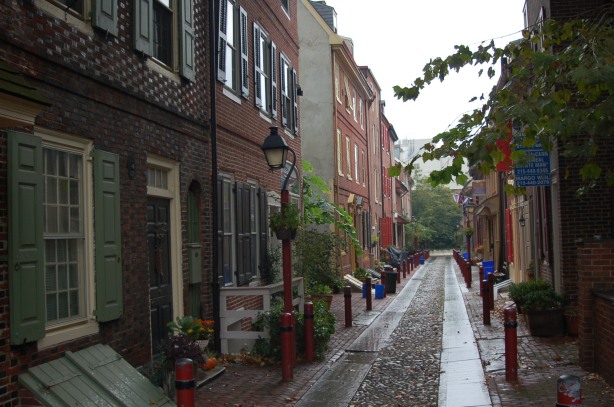 Free from work obligations, we head down 2nd Ave on an overcast, yet warm day, taking a quick walk through Elfreth’s Alley –” the oldest residential street in the US” (watch out Europe, this street dates back to the 1700’s!) It’s a cozy little spot, and has gorgeous, early colonial architecture I love so much, accented with authentic 1700’s indigo recycling bins.

Further down 2nd, I feign non-recognition of Christ Church.

“Is that the Church from ‘National Treasure’….” Marti stops herself.

“The Church from What?” Me, pretending not to know exactly what she’s talking about because I saw the movie ‘National Treasure’ on the plane and actually kind of liked it even though it’s fucking ridiculous.

“From the movie ‘National Treasure’, which was a pretty good movie.” Marti, defiantly

I laugh, but don’t want to admit liking a Nick Cage movie outside ‘Raising Arizona’, or ‘Con Air’. 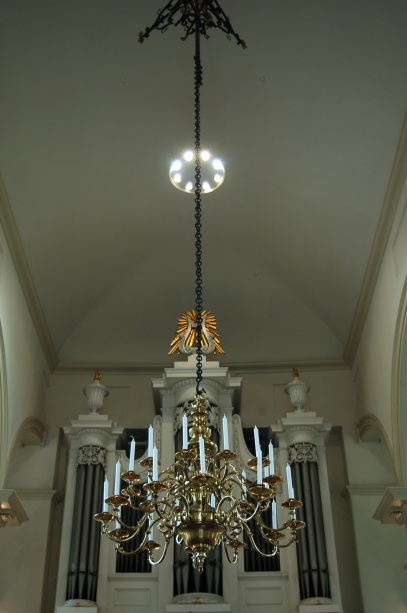 You, me and symmetry

With Philadelphia, William Penn (hence, Pennsylvania) had the colossal ambition of creating an autonomous zone, free from religious persecution. In touring Christ Church, where they name-drop Ben Franklin, William Penn, George Washington as regulars…I notice right away this proposed religious equality was doomed from the get-go.

Marti Checks out the gilded Drink List – What? No Hennesey VO?!

Check out the George Washington VIP pew in #58. Now check out William Penn’s pew next-door #60 – religious equality my pale-white ass. The Original G-Dub’s pew is thrice the size! You could fit a Jacuzzi in there. Bigger posse? First President? Pshaw!

A quick soul-warming greasy-spoon breakfast at Mrs. K’s Coffeeshop, where I become enamored with the customers’ interaction. Not one person in the restaurant is on an iPhone, computer, or electronic gizmo – people are genuinely interacting, like, socially. So this is what the US in the 1700’s looked like. Awesome!

Over to the Liberty Bell; we get pushed into the building by a horde of eager Asian tourists who are unaware one of my biggest pet peeves is being touched/pushed whilst waiting in line.

Marti and I stroll to the real Liberty Bell, skipping some of the model exhibits while a tidal wave of tourists builds behind us, passing quickly on our flanks. 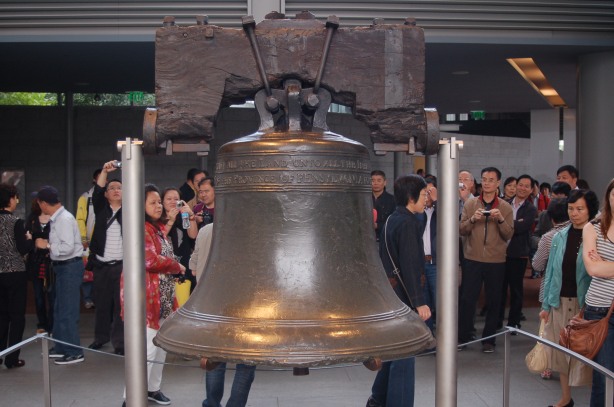 (Warning: I apologize for generalizing here, it’s truly observational, and realize Americans are  just as, if not more, clueless while traveling) Photos snapped off like so-much-fanny-pack-paparazzi-madness, and I conclude that the technologies of digital camera were pioneered in Asia due to the rising costs/waste of developing their own film.

After getting elbowed, crotch-level, for the umpteenth time, I wonder aloud, “Are you even framing your shots!? Why are you taking pics of the ground?”

Across the street, at the Independence National Historical Park, you can enter for free without being a part of a tour.

We duck into the American Philosophical Society, directly across from Independence Hall (where the Declaration of Independence was signed, and resigned after Ben Franklin dumped his beer on the original) and are greeted by museum employees – Ursula, Martin, and Marjorie.

Martin, right away, gives us an informative run-down on the building, history, and art exhibit presently showing. Formalities dropped, we chat about the people of Philadelphia, where to go to eat/explore. Martin being an artist, talks about some of his inspirations:

(You can see some of Martin’s talent-laden visions here: http://www.martin-campos-artist.com Great guy – buy his work)

Martin tells us we must visit The Magic Gardens in South Philly.

I jot his suggestion down, listening intently to some of Ursula’s hilarious/provocative Roam About-esque tales from the 70’s – which I won’t repeat, they are her own to use – maybe I’ll go back to Philly for an interview – but I ask her if she wants to get a drink with us after work.

She declines, citing alcohol as a catalyst in some of her adventuring tales. Kindred spirits…(puntendre!)

We do a quick tour of the art-space, get a motherly hug from Ursula, and say goodbye to the coolest, most informative curators in Philly. 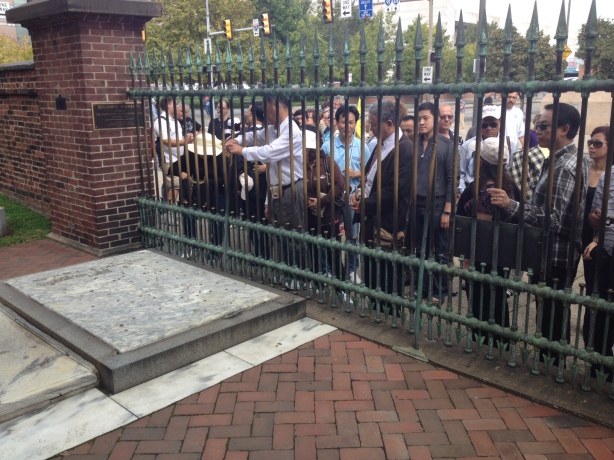 I pay the $10 entrance fee to Christ Church Graveyard for a better view of Ben Franklin’s gravestone. Then, I realize I paid $10 to see something you can see/touch through the fence. I got schtupped so you don’t, dear readers!

People throw pennies/nickels on Mr. Ben’s gravestone, which I find ironic, as he is on a much higher monetary denomination. I wonder how he feels about this… 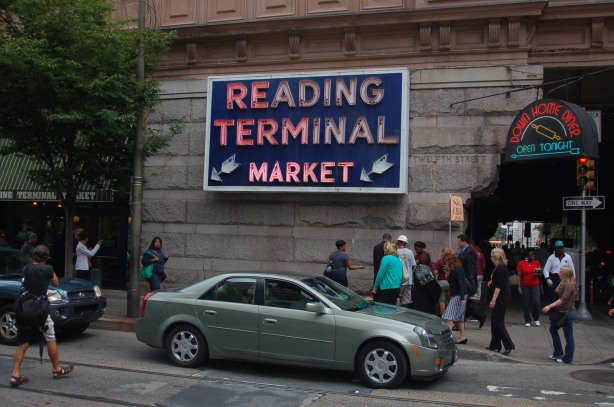 The New Cadillac – check your local dealership for details. 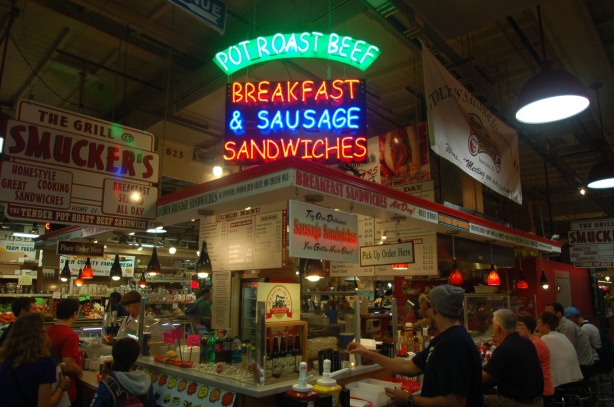 The smell of Amish cooking punches you in the nose, then brisket/cheesesteak, sausages and other artery clogging goodness along with fresh produce in the south quadrant. I grab a banana/strawberry smoothie, saving my arterial constitution, but vow to come back for cheesy goodness.

A long stroll to 22nd Street through the heart of downtown/City Center West to the MÜtter Museum (with large, pasted umlaut). 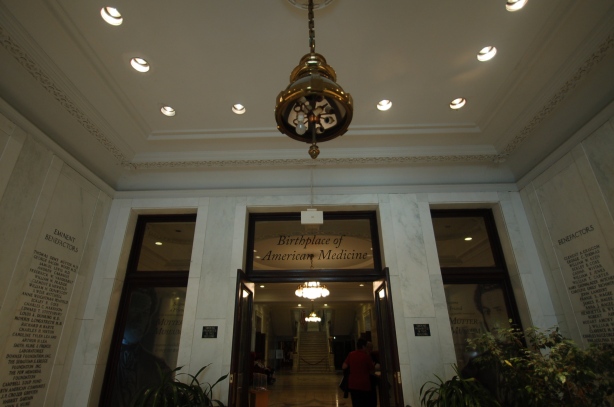 The MÜtter Museum is not for the faint of heart. I wrote about Kunstkamera in Saint Petersburg a while back – MÜtter is a nicer, more comprehensive collection dabbling in the medical bizarre, not intending to be gruesome, or as a carny sideshow but informs about…how to put this…anomalies of the body. 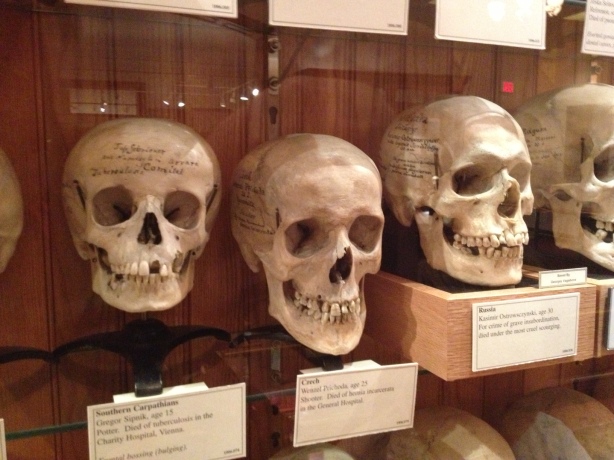 Then, things get ‘weird’ with conjoined twins in a jar, the soap lady (ask in the comments if you dare, and I’ll tell), a sundry collection of ingested objects, wax forms of elephantitis, and an extensive collection of cysts/tumors. 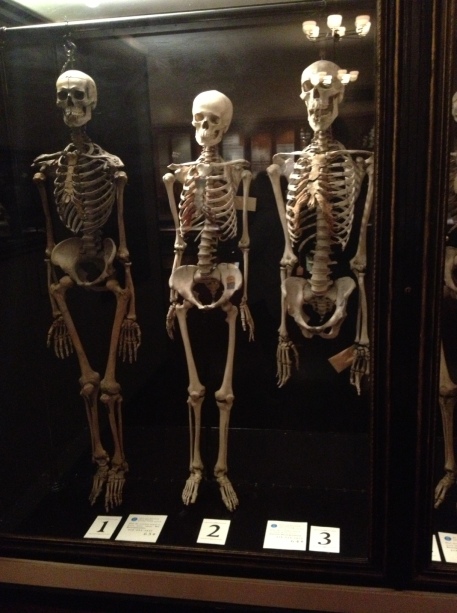 With Halloween right around the corner, and a general curiosity in the obscure, this is a perfect spot to get lost for a few hours.

Back on the street through Rittenhouse Square, zig-zagging down gorgeous streets with historical brownstones, to delicious Monk’s Café – suggestion of friend Mark Pagan– a Belgian beer haven with, literally, a ‘Bible of Beer’.

After some Allagash White Ale, Mussels, Frites, and a scrumptious pulled pork sandwich, we waddle a mile and a half North to the Philly Museum of Art.

To my (only, Marti doesn’t understand) dismay, the Rocky Balboa statue is not at the top of the museum stairs. Blasphemy! He defeated communism in Rocky IV! 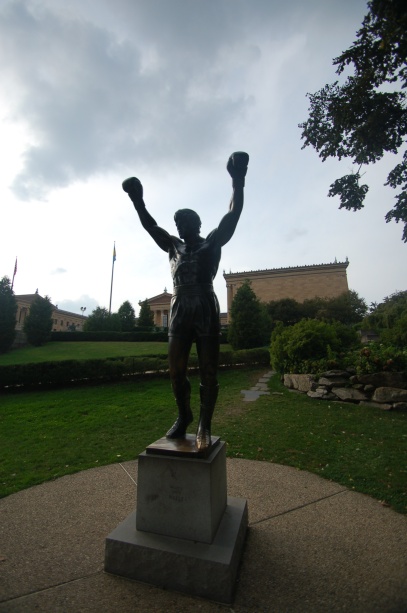 No one puts Rocky in the corner!

The museum is massive. MASSIVE. Similar in set-up to The MET in NYC, the rooms keep going and going, and we get turned-around a couple of times.

I keep coming back to a sort of ‘stamp mosaic’ piece by local artist Isaiah Zagar. The name sounds familiar, and the more I look at the piece, the more intricacies and hidden sayings I find within. I want to learn more about the artist, but a guard yells at me for being ‘too close’, and again yells at Marti for taking a non-flash photo of Isaiah’s placard for memory-sake (more on Mr. Zagar later) back to Rocky/Communist comment.

The prison is non-functioning outside regular tours of the building, ghost tours, and the gigantic haunted house being advertised by crazed inmates on stilts running around the sidewalk accosting unsuspecting tourists.

(Last time I was at a haunted house, one of my ex-girlfriends, reacting to a would-be attacker-zombie, tore my dress shirt clear off my body).

The final stop for the night is the Barnes Foundation – where I get tickets comped, and Press Access after mentioning Roam About (take note, travel bloggers).

If you’re not familiar, Dr. Barnes was a very successful chemist (of pharmaceutical flavor) and wanted to keep his extensive collection – including works from Picasso, Matisse, Renoir – in his own house, the way he curated it, forever. Specifically writing in his will that the city of Philly could not take his beloved art, and it shall remain in his house.

When he passed, the city of Philadelphia basically uprooted Dr. Barnes’ home, built the new, Frank Lloyd Wright inspired (at least) building to house the collection exactly to Dr. Barnes’ specifications.  The space is absolutely beautiful – the collection, impressive, yet, if I were Dr. Barnes’ ghost, I’d be pissed.

Then again, a larger public gets to see famous works from artists I’m sure would like it the way things have turned out.

Then again (again), the sponsors of the Barnes, according to the Press Packet are the likes of J.P. Morgan, PNC, and ComCast…

Crawl back to the apartment, exhausted, falling asleep before hitting the bed.

In the middle of the night, dreaming of Philly Cheesesteaks, I’m  jump-started awake by the sounds of someone yelling, trying to get into our front door.