There’s nothing scarier then the sound of someone trying to get into your rented vacation apartment door when you have the defect of degenerative eyesight.

Startled awake, I grasp for my glasses, and something to bludgeon with, stumbling out of bed, smashing my toe into some immovable object.  I have Marti’s not-as-strong-as-my glasses on, and half-crash into a cage containing the apartment owner’s chinchilla as I dig around for a knife in the kitchen.

I hope to rile the furry beast enough to gnaw the intruder’s face off.

Turns out, the intruder is just one of the incredibly drunk dudes staying in the apartment upstairs, mistaking our store-front converted door for his.

He tries the lock once more, putting some shoulder into it, then someone from above yells, “Oh shit, dude, wrong door!”

Groggy from the adrenaline-inducing incident, freshly showered after soiling my pantaloons, we head to South Philly through a warm, gloomy morn in search of the Magic Gardens.

A couple of weeks ago I wrote about artist Isaiah Zagar, who had a beautiful print showing at the Philadelphia Museum of Art. I was captivated by the piece, and along the way to South Street, I noticed little ally ways splashed in mosaics very similar in color and style to the print.

The mosaics grew in size and occurrence, as we got closer to South Street. Then, a whole building done in these fantastic mosaics; the artist finally revealing himself as Mr. Zagar.

I’ve seen some bizarre exhibits in my travels, even lived by a giant toy tower in the East Village, but the Philadelphia Magic Gardens is, to say the least, uniquely extraordinary.

According to their pamphlet, it took Zagar 14 years to complete his masterpiece –  basically, a fully inverted city plot made of one giant mosaic.

Words are little use, and the pictures tell only half the story…if you want a supplement to the story, there’s this documentary CLICKY CLICK.

On a grand scale, The Magic Gardens are awe-inspiring, gorgeous, and elucidate an inner-child fantasyland. 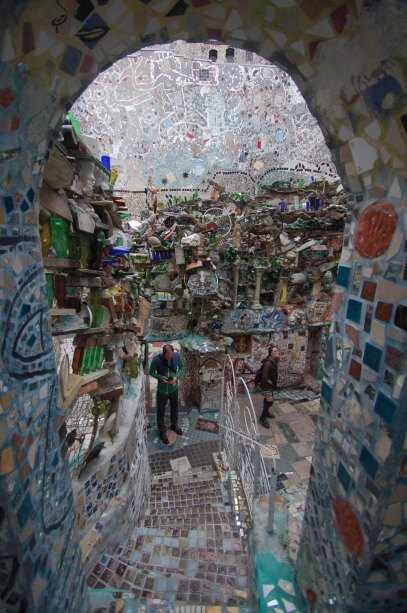 On a macro-level, it tells a thousand stories through intricately painted, emotional vignettes, involving the viewer in the works through shards of mirrored glass.

Marti and I spend an hour or so attempting to soak-up the space, having difficulties processing the ‘whole’, while I fire off my brandished camera like some a quixotic goon.

On the way out, a woman follows us out saying, “I just don’t get it. It’s just a bunch of junk…”

Walk straight into the South Philly Oktober fest, and for the first time in my life, it’s too early for a beer. Instead, we spend a few hours perusing the various thrift stores, record shops, bizarro-tiques on South Street, making our way towards the Italian Market. 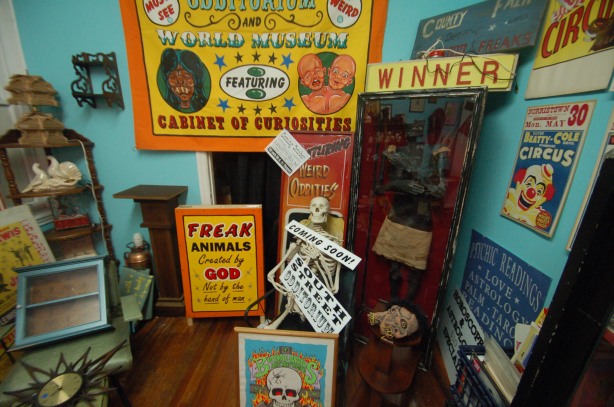 The feuding couple creates for some serious flaws in travel routes, and makes this blogger want to revert back to the olden times of printed directions.

iPhone/Google feud takes us to a body shop repair haven surrounded by industrial kitchen stores similar to the one Jimmy tried to whack Karen in, in ‘Goodfellas’.

Sinking feeling phone/interwebs is trying to kill us.

Searching for a giant Italian market with little success, we stumble upon the dueling cheesesteak franchises; Geno’s and Pat’s on the corner of 9th and E. Passyunk Ave. 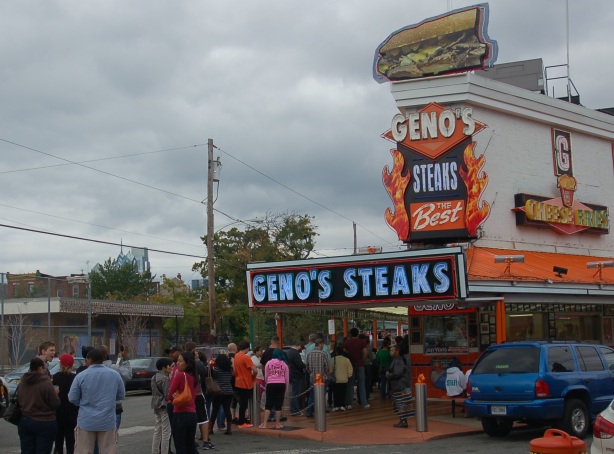 Attracted to the shiny neon lights, and Harley-bar look, we pick Geno’s, standing in line with 20-30 cheesesteak fanatics.

Geno’s has the production line down to a science, delivering cheesesteaks to the customers in less than a minute.

A little math here – let’s say each person represents at least $12; at the time of our waiting, 19 people in front of us.

In four minutes I have drinks and steaks in hand.

There’s minimal overhead, no advertising costs, and the line is, according to repeat customers, steady all day.

Holy Shit. I should have been a cheesesteaker.

That’s some Oprah money right there, or Tony Montana.

I eat Cheez Whiz for the first time in 20 some years, devouring a greasy cheesesteak with onions, hoarding some for later in my ridiculous flavor-saving beard.

My guts creak like an old ship, blithering about the reintroduction of faux cheese into my diet, as we finally find the Italian Market (literally 100 feet from Geno’s) through sense of smells; jamon, coffees, fresh seafood, produce, cheese, and a myriad of freshly cooked beasts.

Love him, hate him, Frank Rizzo presides over the Italian Market. 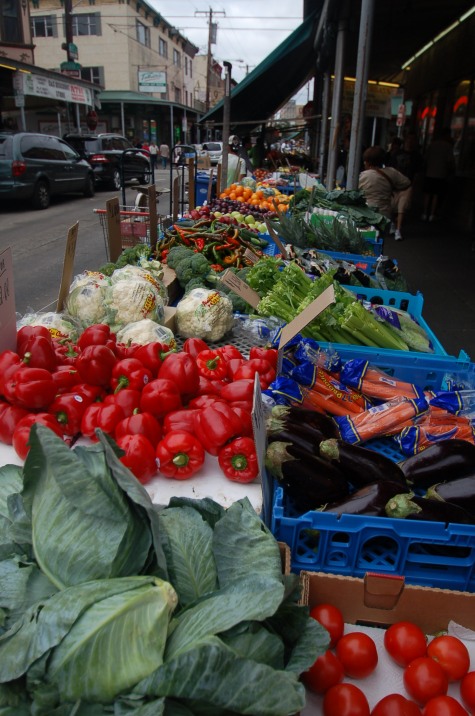 Walking for 14 hours a day finally catches up to us sloughing back up to Old City finding refuge in Khyber Pass Pub on 2nd, where, instead of perpetual conflict (namesake), we find the Buckeye’s game awaiting us under cozy bar lights, and a beer menu with enough 9% ‘donks’ and Ales to make me quote Rudy’s Dad: “This menu is the most beautiful thing these tired old eyes have ever seen.”

Hours later, merry in victory, we score again when the hostess at the highly recommended tapas joint – AMADA – around the corner, tells us there’s a cancellation.

A comforting revelation unveils itself during the last trip-meal of delicious grilled calamari, spanish olives, bbq Octupus, and foodgasm-inducing Chicken Paella; I really, REALLY like Philadelphia.

Shitty pic, but take note – this is the only way to make GOOD Calamari.

I keep it light on Roam About in ’rounds-ups’ of my travels because, like people, cities/countries are living breathing entities with moods, and you might catch ’em at the wrong time and come away with a negative conception.

But swear to goodness, if I had to move back to the East Coast, I would totally skip New York and hit up its “Sixth Borough”, Mo’ Town Philly; it’s akin to Boston, New York, Rhode Island, but different, unique, grittier, and more genuine.

Go there. And if you’ve already been, go again – spend some time, explore; you’ll love it. Until next time, Philly. -Mike